Through the Tiger's Eye 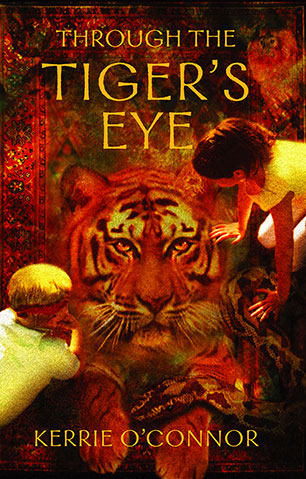 An exciting fantasy-adventure about twelve-year-old Lucy and her little brother Ricardo, who discover a secret tunnel that leads them to a group of children held prisoner in the jungle.

Just then T-tongue decided to take matters into his own paws. He sniffed the air, barked, shot across the floor of the pit - and disappeared.

Lucy and her little brother Ricardo follow their puppy and the mysterious, golden-eyed Tiger-cat into a secret tunnel leading to a foreign country - a country where children are held prisoner in the jungle.

Lucy still didn't understand anything and it still felt crazy, but suddenly it was also simple; if Rahel was going to risk rescuing the little girl and the other kids, then Lucy had to help, even if she didn't have a clue how.

Through the Tiger's Eye is a page-turner; a dashing adventure crammed with action, mystery and vivid detail.

'O'Connor's impish imagination is exceptionally vivid and will delight children of all ages. If there's any justice, she'll become as sought after as Rowling.'- Cameron Woodhead, The Age
More books by this author

Kerrie O'Connor has been a journalist for 20 years. Her career has spanned print and radio and she has won awards for investigative reporting. She left ABC Radio to answer the call of Through the Tiger's Eye, which she says has been bubbling away inside her for years since she travelled to war-torn Eritrea and made a series of documentaries for Radio National.