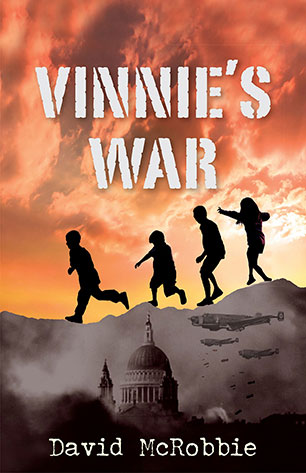 The story of a homeless boy who starts by losing everything, and - through his experience as an evacuee in World War II - finds friendship, vocation and a place to belong.

Just then came: crump, CRUMP, CRUMP! Three bombs in quick succession, coming frighteningly close. With each explosion, the ground shook. Dust and chips fell from the ceiling. Everyone in the shelter gasped at the same time. Vinnie held his breath, waiting for the fourth bomb, but it didn't come.

When Vinnie is sent away from the bombs in London, he has no idea what awaits him. All he has left of his old life is his harmonica.

On the train, Vinnie meets fierce Kathleen, sweet Joey and gangly Dobbs. The evacuee children find themselves thrown together in the country town of Netterfold, which seems beautiful and peaceful - until they meet the locals.

There is a war raging across Europe, but Vinnie and his friends soon find they have their own war to fight as they face up to terrifying teachers, bad billets, and hostile neighbourhood kids who set out to make their lives as 'vaccies' miserable. And when things start to go missing, they discover that there are mysteries lurking in Netterfold's shadows, just waiting to be solved.

Through music and friendship, can Vinnie make peace and finally find a place where he belongs?
More books by this author

David McRobbie is the author of many best-selling books for children and young adults. He has published more than thirty titles since 1990, and many of his stories have been adapted for television, including the very funny Wayne series, Eugenie Sandler PI, Fergus McPhail and the gripping thriller See How They Run. His young adult novel Tyro was shortlisted for the 2000 Children's Book Council of Australia Book of the Year Award for Older Readers.

David's background is a varied one: he has worked as a ship's engineer, a primary school teacher, a college lecturer, a parliamentary researcher in Papua New Guinea, and a radio and television producer with the Australian Broadcasting Corporation. He writes full-time.