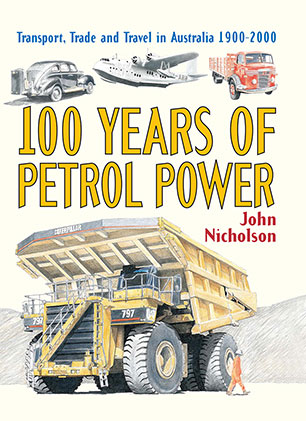 The fifth and final book in John Nicholson's Transport, Trade and Travel series for upper primary schoolchildren shows how Australia entered the Age of Oil, becoming reliant on petrol and diesel to power cars, trucks, trains, tractors, ships, machinery and aeroplanes - all essential to our economy.

From the good oil to peak oil

John Nicholson looks under the bonnet to find out when and how we became an oil-driven society. Starting with a Brisbane bicycle-seller's motorised bike, he introduces us to

the Little Grey Fergie' tractor, treasured by generations of farmers

the heroes in flying suits who pioneered Australian aviation

In the fifth and final book in his impressive series, John Nicholson shows how the internal combustion engine superseded horse and steam power as the driving force in our modern economy. He leaves us with the question: where to after the oil runs out?

The Trade, Transport and Travel series:

John Nicholson is an award-winning author with a passion for the built and natural environment and its impact on human society and history. He originally trained as an architect and has built his own environment-friendly home in the Australian bush. He relishes the detailed research that goes into his books. He is renowned for his attractive and accurate illustration of the world around us.

Many of John Nicholson's books have been shortlisted in the Children's Book Council Book of the Year Awards. Four of them, A Home among the Gum Trees, The First Fleet, Fishing for Islands and Animal Architects, have won the Eve Pownall Award for Information Books.