What a shocking way to go! 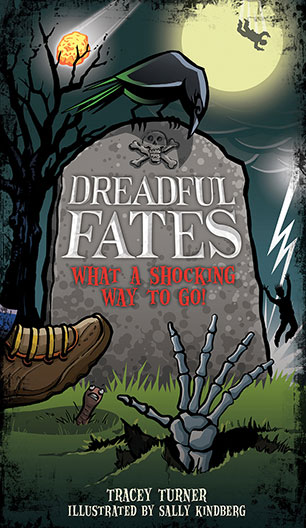 An accessible mix of bite-size facts and entertaining tales about people who have met gruesome ends.

From grisly murders to unusual funerals, Dreadful Fates takes you on a gruesome journey through history to find out about people who have had the misfortune to suffer a dreadful or unusual end. From ancient times to the present day, readers can find out about everything from Aeschylus, the ancient Greek who died when a tortoise fell on his head, and the man who tripped over his own beard, to a countless number who met their end through laughing too much!

Other unfortunate ends include:

- The Mexican musician who choked to death on the world's smallest mouth organ.

- The Holy Crusader who stopped for a drink in a river but fell in due to the weight of his armour and drowned.

- The actress whose costume caught fire on a Civil War movie set when a careless crew member threw away the match used to light his cigarette.

- The entire football team killed by lightning during a match because of the metal studs in their boots.

- The actor who died between scenes during a live television play: the director continued the play, improvising around the absence of one of the cast members.
More books by this author

Tracey Turner is a best-selling non-fiction author. She has written Whitaker's World of Weird for A+C Black and her 101 Things You Need to Know (Bloomsbury) was selected by the British Education Secretary as a top book for teenage boys. Tracey has previously collaborated with Sally Kindberg, illustrator of Dreadful Fates, on The Comic Strip History of the World.