It's True! The Romans were the real gangsters (6) 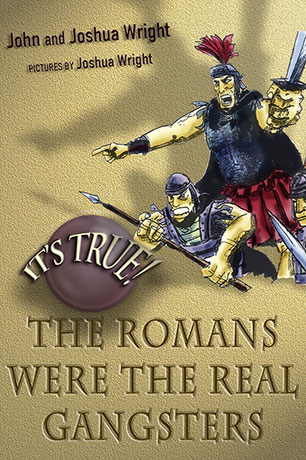 Everything you wanted to know about Romans, this is one of the first six titles launching the fantastic new non-fiction series, It's True!

Psst! It's true! This is the best book on ROMANS you'll ever read!

Marius butchered his enemies, Crassus stole, Clodius lied and Julius Caesar didn't care about anyone other than Julius Caesar. It's true: the Romans were gangsters.

This book is full of cheating, stabbing, vomiting and general bad behaviour. There are severed heads on spears, messy massacres and streets flowing with blood. Find out who wore a purple-striped toga, who was crooked, who was mean and who was just plain crazy.

After painting a girl's hair blue in kindergarten, Joshua Wright knew the artistic life beckoned.His drawings and stories are full of mayhem and adventure, just like ancient Rome. He is the creator of the popular graphic novels Plotless Pointless Pathetic and Hapless Hopeless Horrible, recently adapted into a successful stage play by RMIT.

When John Wright left Australia to become an academic in the UK, he had to give up surfing and football. So, as well as writing scholarly articles, he has now taken up Kendo lessons with some of the finest samurai in England. According to his brother Joshua, John Wright is an ancient history nut'. He wrote this book during a solo archaeological fact-finding expedition in Egypt.