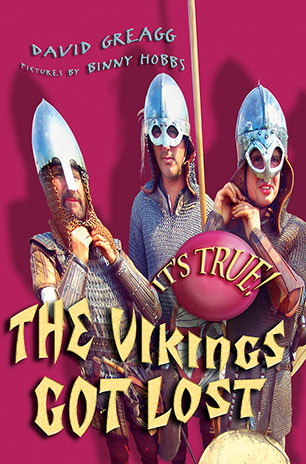 The nineteenth title in the popular It's True! series, with jaunty illustrations by Binny Hobbs, this book paints the Vikings not only as fierce warriors and conquerors but as daring trader-explorers, law-makers and storytellers.

Psst! It's true! This is the best book on VIKINGS you'll ever read!

Meet Erik Blood-Axe - plus Ragnar Hairy-Pants, Ulf the Unwashed, and their mates. The Vikings are on the loose!

The Vikings were very busy. On Mondays they invaded the countries nearby with axe and sword and fire. On Tuesdays, they made pizza. Wednesdays were for building longships and taking spa baths. Thursday was axe-sharpening day. On Fridays they hunted walrus, or went sailing and got lost. Saturdays they tested their swords and Sundays they got ready to do it all over again!

David Greagg was born in Perth but has lived in Footscray, Melbourne, since 1975. His university studies included Science, Maths, English and medieval languages. As a result, he has been employed as just about everything (from company accountant to travelling comedian) and until recently taught Maths, Chemistry and Literacy at a Melbourne secondary college. This is his second title in the It's True! series, following It's True! Burke and Wills Forgot the Frying Pan.