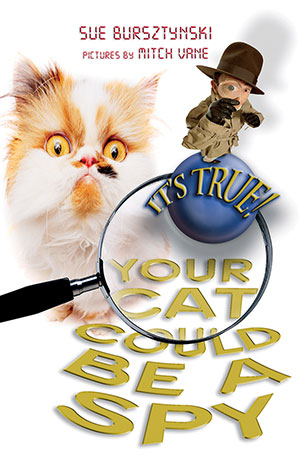 Famous episodes of courage and cunning through the ages, spycraft and spy gadgets. Discover the top-secret world of secret agents, from the Ancient Romans to the Cold War and beyond. This is the fifteenth book in the fantastic non-fiction series, It's True!

Psst! It's true! This is the best book on SPIES you'll ever read!

How would you find out a secret without getting caught? You need the inside story on sneaky spy gadgets, crazy codes and hidden messages. From the plain-clothes police of ancient Rome to the nimble ninja of Japan, spies have always stolen secrets and spoilt enemy battle plans. Check out the undercover cat, the spy who died over dinner and the real agent 007. Get the scoop on super snoops and risky missions
More books by this author More books in this series

Sue Bursztynski grew up in Melbourne's beachside suburbs and still lives there, around the corner from where she spent her teens, though she has travelled and lived overseas. She discovered writing and storytelling early in primary school, when her teachers put her up in front of the class to tell stories while they got on with their marking and other work. Most of Sue's writing is for children but she also writes science fiction and fantasy and works on a science fiction/fantasy magazine called Andromeda Spaceways In-Flight Magazine. Sue grew up in the 1960s, when the Americans and Russians were using all sorts of gadgets to spy on each other. She says, I like fiction, but there are so many true stories about spies and spying that are even weirder than fiction, I just couldn't resist telling some of them!'