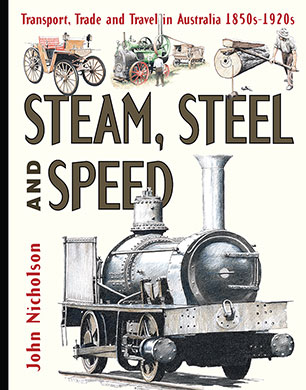 The fourth book in John Nicholson's fascinating series about Transport, Trade and Travel in Australia takes us back to the days of Australia's industrial revolution, with steam-powered railways, mines and factories speeding up travel and production of goods.

How did steam power change Australia?

In this book, you can read about

* paddle steamers trading up and down the nation's waterways

* the Hobnail Express, the Tea-and-Sugar Train and the Railway Songster

In the fourth book in his impressive series, award-winning author John Nicholson shows how the miracle of steam power brought Australia into the mechanical age.

The Trade, Transport and Travel series:

John Nicholson is an award-winning author with a passion for the built and natural environment and its impact on human society and history. He originally trained as an architect and has built his own environment-friendly home in the Australian bush. He relishes the detailed research that goes into his books. He is renowned for his attractive and accurate illustration of the world around us. Many of John Nicholson's books have been shortlisted in the Children's Book Council Book of the Year Awards. Four of them, A Home among the Gum Trees , The First Fleet , Fishing for Islands and Animal Architects , have won the Eve Pownall Award for Information Books. The first book in the present series, Songlines and Stone Axes , won the young people's history prize in the New South Wales Premier's Awards of 2007.