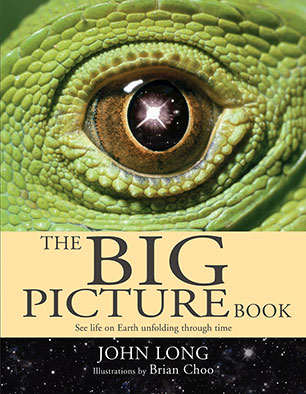 Four billion years of evolution in 48 pages, told in simple words and stunning images, using the latest scientific research. A must for adults as well as children.

With a lyrical text and astounding images reflecting the latest scientific research, The Big Picture Book explores the origins of the universe and the solar system, and the evolution of life on Earth.

Watch as continents shift over billions of years; as the first stirrings of life appear and evolve, over millennia, into the birds, beasts, plants and fish we know today.

Explore our planet's history in The Big Picture Book.
More books by this author

John Long began collecting fossils when he was seven and he found his first dinosaur bones near Inverloch, Victoria, when he was a university student. Since then he has travelled around the world on fossil expeditions.

John now lives in Melbourne with his wife, Heather. One of his favourite hobbies is martial arts - he has a black belt in karate!

John was for many years Curator of Vertebrate Palaeontology at the Museum of Western Australia. He is now Head of Sciences at Museum Victoria.

Brian Choo is an artist who has been studying and reconstructing fossil animals for many years.