To Hope and Back 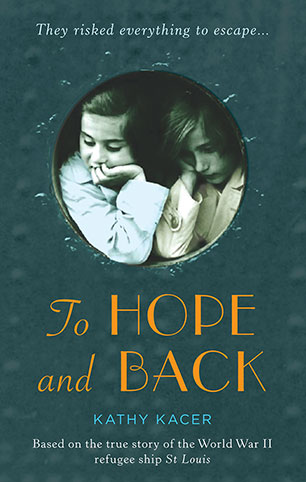 Based on the true story of the last refugee ship to leave Germany in 1939, the St. Louis, this powerful book tells the story of two of its passengers, Lisa and Sol, who were children on board the ship. They were among the lucky ones to survive.

Lisa and Sol board the luxury ship St Louis in Hamburg, Germany on 13 May 1939.

They are Jewish, as are almost all of the passengers on board; although war has not been officially declared in Europe, the Nazis have been persecuting Jews for years. The St Louis's German captain, Gustav Schroeder, is determined to see his passengers to safety.

They set sail for Cuba, and the atmosphere on the ship is optimistic,but as they learn that Hitler's propaganda has turned the country against them, the mood changes to despair.

A powerful true story from the bestselling author of The Diary of Laura's Twin and Hiding Edith.

Kathy has won many awards for her writing. In 1999 she wrote her first book in Second Story's Holocaust Remembrance Series for Young Readers, The Secret of Gabi's Dresser. Since then she has penned five other books for the series: The Underground Reporters, Clara's War, The Night Spies, Hiding Edith, and The Diary of Laura's Twin. Her first adult book is the non-fiction Restitution: A family's fight for their heritage lost in the Holocaust.

The rights to her books have been sold to many countries, including Germany, China, Italy, Thailand, England, Japan, and Slovenia. A former psychologist who worked with troubled teens, Kathy now writes about the Holocaust for young readers and travels the country speaking about it. She also addresses adults about how to teach sensitive material to young children. Kathy lives in Toronto with her family.

To Hope and Back describes a doomed attempt by nearly one thousand Jews to escape the Germany just prior to the start of WWII. This factual narrative, based on the recollections of two survivors of the Holocaust, has many positive aspects that would enable it to be used effectively in upper primary or junior secondary classes with lower ability readers. The style of writing is unembroidered and rather strangely unemotional, despite dealing with tragic material.  The use of real photographs from the family collections of passengers and accounts of the fate of several key individuals after the story ends increases the appeal of this book. The use of a rich girl and poor boy as the main focusses may seem clichéd to adults but could assist young readers to establish empathy for these key characters. Lisa and Sol briefly explain the reasons for their families’ need to escape and give outlines of the difficulties of leaving, including obtaining visas. The journey, with the passengers’ growing distress at being refused entry to Cuba, their intended destination, and several other countries in North and South America, is described is a straightforward manner.

The politics and adult negotiations are explained in intermittent sections describing ‘What the Captain knew’. Captain Schroeder is presented as an advocate for the passengers against many opponents. These commentaries enable the reader to learn background and gain insights than could not be realistically provided by the young protagonists. Unfortunately, they occasionally serve to interrupt the natural flow of the drama as occurred when the Captain revealed that the passengers will be refused entry to Cuba before the children relate this dramatic turn.This book provides young readers with an awareness of the problems of trying to escape genuine and immediate danger so it is topical for use in Australia with our ongoing debate about asylum seekers and immigration levels.
Bernadette Dell, Mercedes College, Western Australia

Before the darkest days of World War 2, the Jewish people were persecuted in their towns and villages, especially in Germany.  With the rise of Adolf Hitler and the Nazi party, the persecution became more targeted.  Not only were Jewish people were forbidden from parks, cinemas, public buildings and Jewish children from school, the relentlessness of the persecution involved people from being arrested and taken and deported from their homes, families and their communities.To Hope and Back is a story based on real events during this time and is tells the story of two families who were fortunate to escape the Nazis before the final solution was fully enacted.

The families of Lisa and Sol managed to obtain passage on the last refugee ship, the St. Louis, leaving Hamburg Germany before the outbreak of war on 13th May 1939.  They were considered to be the “lucky ones” who have finally made their way to Cuba and eventually the United States of America.  They thought they were finally escaping the nastiness and fear they had known in their home country.  But it was not to be...The story of Lisa and Sol reads like a diary with each child telling their story of how they came to be on the St. Louis, how they passed their time on the way to Cuba and what they hoped for when they reached their final destination.Kathy Kacer has written a realistic story interwoven with facts and photographs about the actual voyage.  The story flows well from each character, Lisa and Sol telling their recollections.I enjoyed reading this book as with the others I have read by the author, ‘Hiding Edith’ and ‘The Diary of Laura’s Twin’.  I would recommend this book to those Junior and Senior secondary students who want to read more and get another perspective about the persecution of the Jewish people during this period of history.
Alison Hay, Teacher-Librarian, Yarra Hills Secondary College, Victoria

Another holocaust story which left me in tears of anger and frustration. This is the story of the 1000 Jewish passengers of the St Louis, a passenger liner headed to Cuba with the full permission, indeed encouragement, of the Third Reich. But it was an evil ploy, these passengers were pawns in a diplomatic game...they were never expected to land in Cuba let alone go onto America as most expected to.They were sold false hope and spent months floating at sea while country after country refused to take them. Rumors of them being a health risk were spread and some countries offered to take them only if a huge ransom was paid.Those aboard the ship were treated well and the captain tried very had to find a safe haven for them all. The story is told through the eyes of child passengers, Lisa and her family in first class and Sol and his family in tourist class. But in the end it mattered little which class they were travelling in, the outcome for these jewish travellers depended on which European country took them in and at which port they eventually disembarked. Only 200 odd would manage to survive the war.It was not the eventual deaths of most of these passengers which angered me nor the german treatment of them, I have read alot of holocaust stories, but the failure of countries
to take these people in and the disregard shown to them when governments knew how they would be treated if returned to Germany. I had expected more of America and Canada and was surprised by their policies on this matter. This was not a story I knew but it is certainly one which we should share with our young students. It is a story which should not be forgotten. It has particular relevance in the wake of the current asylum seeker issues and would foster some interesting comparisons and lead to worthwhile classroom discussions. Does history repeat itself?
Lorene Furmage - retired teacher librarian, Hobart.