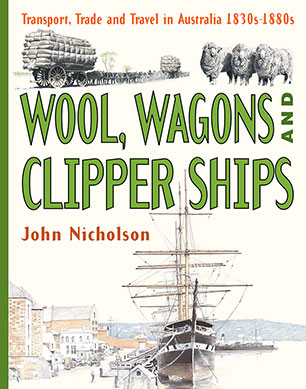 This third book in John Nicholson's fascinating series about Transport, Trade and Travel in Australia takes us back to the days of sheep stations as large as Scotland, bullockies slogging along muddy tracks, clipper ships racing each other to overseas wool auctions, cameleers in the outback, and Cobb and Co. coaches linking settlements around the country.

From the 1830s on, Australia 'rode on the sheep's back', earning wealth by selling wool to countries around the world. These were the days of squatters with sheep stations the size of Scotland; lone shepherds, half-starved and half-crazy; bullockies, horse teamsters and cameleers carting goods across the outback; clipper-ship captains racing to overseas wool auctions; Cobb + Co coaches carrying mail and passengers to every corner of Australia.

This third book in the series portrays a new trading economy. Australia still depended on the hard labour of people and animals, and the windpower that sent sailing ships across the world.

The Transport, Trade and Travel in Australia series:

John Nicholson is an award-winning author with a passion for the built and natural environment and its impact on human society and history. He originally trained as an architect and has built his own environment-friendly home in the Australian bush. He is renowned for his attractive and accurate illustration of the world around us. Many of John Nicholson's books have been shortlisted in the CBC Book of the Year Awards. Four of them, A Home among the Gum Trees, The First Fleet, Fishing for Islands and Animal Architects, have won the Eve Pownall Award for Information Books.