Alex and the Watermelon Boat 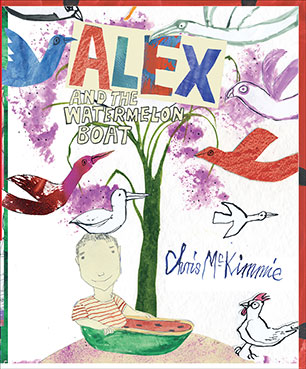 A brilliant picture book inspired by the Brisbane floods, from the one and only Chris McKimmie.

The river had burst its banks. The dam was overflowing. 'Don't go outside, Alex!' Mum shouted. But just then Rabbit hopped out the open window .

Chris McKimmie lives in Brisbane. This story grew out of his experiences during the floods of January 2011.
More books by this author

Chris was for many years the convenor and originator of the illustration program at the Queensland College of Art, Griffith University. He wrote, illustrated and designed a series of eight children's books in the 70s, and has designed many covers for the University of Queensland Press. Represented in the Graphis Annual, he has worked as a graphic designer and publications designer for the ABC, the National Parks and Wildlife Services and the University of WA Press. He was production designer for the award-winning short film Stations and the feature-length film Australian Dream, and wrote the lyrics for the songs in both films. He regularly exhibits his paintings and drawings.