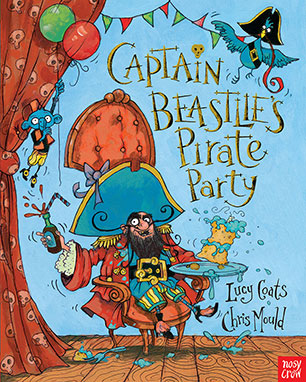 With buckets of yuck appeal and a cast of larger than life characters, this laugh-out-loud, rip-roaring romp of a pirate story is packed with dynamic illustrations from award-winning illustrator Chris Mould. This paperback edition includes a free audio reading.

Who's the grubbiest pirate on the high seas? Why, it's Captain Beastlie, me hearties! He is a horror and embarrassment to his ship-shape crew. Captain Beastlie is eagerly counting down the days till his birthday - but what he doesn't know is his crew has got a special secret lined up for the Big Event. His days of being the smelliest, dirtiest pirate ever are numbered.

Comes with a free audio reading featuring music and using children's voices - accessible anywhere and anytime you're connected to the internet by scanning a QR code on your smartphone or tablet.
More books by this author

Lucy Coats worked as a children's editor and bookseller before turning to full-time writing, and is the author of more than twenty-five titles for all ages, including Atticus the Storyteller's 100 Greek Myths which was shortlisted for the Blue Peter Book Award. She lives in the countryside with her husband, two children, three lunatic dogs and ten thousand assorted books.

Chris Mould went to art school at the age of sixteen. During this time, he did various jobs, from delivering papers to washing-up. He has won the Nottingham Children's Book Award and been commended for the Sheffield. He loves his work and likes to write and draw the kind of books that he would have liked to have on his shelf as a boy. He is married with two children and lives in Yorkshire. Chris Mould spends his working day in one of the prestigious art studios at Dean Clough Mills in Halifax. His studio is clearly marked with a skull and crossboned warning as to what might lie within. Chris is not confined to book illustration. He has worked for the RSC, the BBC, the FT and many other famous initials, as well as film development work for Aardman Animations which included character and environment development work on the film Flushed Away. When away from his studio, Chris spends most of his time with his wife Sue and his two daughters Emily and Charlotte.