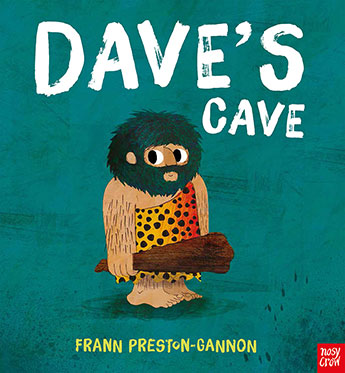 A laugh-out-loud story about a restless caveman who discovers there really is no place like home.

Dave loves his cave. Inside is decorated EXACTLY the way he likes it. Outside there is a lovely spot for a fire and the grass is always lovely and green. But, Dave is unhappy. What if there might be an even better cave out there? And off he sets in search of a new home. But it turns out that good caves are hard to find. They're either too small, or too big, or too full of bats, until he finds one that looks MUCH more promising. Outside has the perfect space for a fire and the grass is greener than any he's ever seen... But why does it look so familiar?
More books by this author

Frann's first picturebook, The Journey Home, was published in 2012 and was shortlisted for both the Waterstones Children's Prize and the Cambridgeshire 'Read it Again' book Prize. In 2011 she became the first UK recipient of the 'Sendak Fellowship' and spent a month living with and learning from, Maurice Sendak. She is one fifth of the design group Zombie Collective who specialize in workshops and pop-up galleries. They have worked with clients such as the Tate Britain, the House of Illustration, the Design Museum, the British Library and UCL Hospital creating workshops for both adults and children.

The basic premise of this book is a quote from T. S. Eliot which is shared on the very first page, “We shall not cease from exploration, and the need of all our exploration will be to arrive where we started and know the place for the first time”. This is certainly true for Caveman Dave who finds himself right back where he started from but rather than trying to get the target audience to discuss such an esoteric quote, they are more likely to respond by sharing their stories of times they have really wanted something or to go somewhere and it hasn’t lived up to expectations. “The grass is greener” comes to mind.

While it is a charming story with a predictable outcome, I found the rather stilted language to be distracting. In my head it sounded like those old-time Western television shows where the Native Americans spoke a halting English and it bothered me. For example, “This Dave. This Dave’s cave. Dave like cave.” At first I thought it had been poorly edited but no… Perhaps it has been done to emphasise the primitiveness of Dave who is a caveman; perhaps children who haven’t been exposed to those Westerns won’t notice it; perhaps it can be an introduction to the need for fluent speech… for me, it just made what could have been a great story a little less so.

However the big, bright bold illustrations are very appealing and there is plenty of scope to investigate the sorts of things our ancestors had to deal with like the sabre-tooth tiger in the fourth cave or why Dave was living in a cave to start with. Maybe it will spark an interest in ancient history which our very young love to explore.
Barbara Braxton, Teacher Librarian, NSW