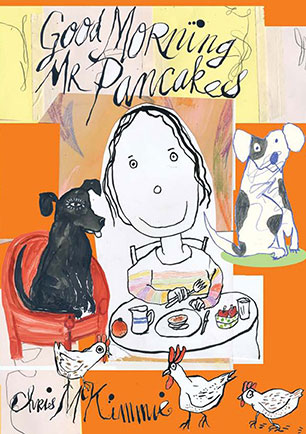 An exuberant picture book from a unique talent featuring a girl who loves animals and a memorable holiday on Bee Island.

It's holiday time for Bee. But first the chooks need their toenails painted, the dogs and cats need their bags packed and Gregor needs enough greens for a week. Then Bee is off to the island. From the strikingly original creator of Brian Banana Duck Sunshine Yellow, Maisie Moo and Invisible Lucy, Special Kev and Two Peas in a Pod comes a glorious celebration of imagination.
More books by this author

Chris McKimmie is a writer, illustrator, artist. His four books so far with A&U are Brian Banana Duck Sunshine Yellow (2006), shortlisted for the 2007 CBCA Awards, Maisie Moo and Invisible Lucy (2007), Special Kev (2008), shortlisted for the 2009 CBCA Awards and Two Peas in a Pod (2010). Chris was for many years the convenor and originator of the illustration program at the Queensland College of Art, Griffith University. He wrote, illustrated and designed a series of eight children's books in the 70s, and has designed many covers for the University of Queensland Press. Represented in the Graphis Annual, he has worked as a graphic designer and publications designer for the ABC, the National Parks and Wildlife Services and the University of WA Press. He was production designer for the award-winning short film Stations and the feature-length film Australian Dream, and wrote the lyrics for the songs in both films. He regularly exhibits his paintings and drawings.