Kick with My Left Foot 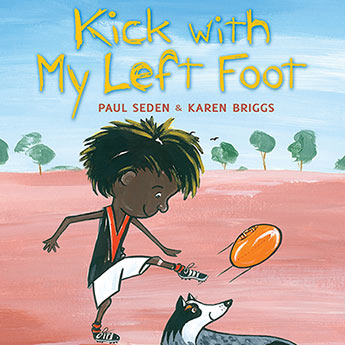 A lively and endearing story about a child in an Indigenous community getting ready to play his favourite game - footy!

I pull the sock on my left foot.

I pull the sock on my right foot.

I lace up the boot on my left foot.

I lace up the boot on my right foot.

It's time for footy!

This book was produced through the Emerging Indigenous Picture Book Mentoring Project, a joint initiative between The Little Big Book Club and Allen & Unwin, assisted by the Australian Government through the Australia Council, its arts funding and advisory body.
More books by this author

Paul Seden is descended from the Wuthathi and Muralag people of North Queensland. He grew up in Darwin and he loves to draw and tell stories. His books include Say Yes (written by Jennifer Castles) and Crabbing with Dad, and his short story 'My Shadow', illustrated by Karen Briggs, was included in The Hush Treasure Book.

Karen Briggs is a designer and illustrator whose inspiration stems from her love of animals and nature, and memories of holidays with her grandmother on the Cummeragunja Mission. These days she illustrates from her home in the Adelaide Hills. Kick with My Left Foot was her first picture book and was shortlisted for the CBCA Crichton Award in 2015. Her other books include The Rabbit-Hole Golf Course (written by Ella Mulvey). Karen is a descendant of the Yorta Yorta people whose ancestral homeland radiates from the junction of the Goulburn and Murray Rivers in North East Victoria.