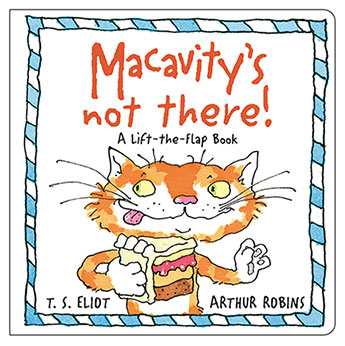 Young readers will love searching for Macavity, the Mystery Cat in this fun and witty lift the flap book, a major new piece of brand publishing from a timeless magical partnership.

Young readers will love searching for Macavity, the Mystery Cat in this fun and witty lift-the-flap book, based on one of the most famous of all T. S. Eliot's cats. Beautifully illustrated by Arthur Robins and with an appeal extending beyond Eliot fans, Macavity's Not There! will sit alongside classic lift-the-flap books such as Where's Spot? and Dear Zoo.
More books by this author More books in this series

Thomas Stearns Eliot was born in St Louis, Missouri, in 1888. He came to England in 1914 and published his first book of poems in 1917. He received the Nobel Prize in Literature in 1948. Eliot died in 1965. Arthur Robins is a renowned cartoonist and illustrator of over fifty books, including Little Rabbit Foo Foo.

In 1939, T.S. Eliot wrote his iconic Old Possum's Book of Practical Cats which became the foundation for Andrew Lloyd Webber’s musical Cats. Within that collection, is a poem which begins:

Macavity’s a mystery cat: he’s called the Hidden Paw…
For he's the master criminal who can defy the Law.
He's the bafflement of Scotland Yard, the Flying Squad's despair:
For when they reach the scene of crime--Macavity's not there!

Macavity's a ginger cat, he's very tall and thin;
You would know him if you saw him, for his eyes are sunken in

Drawing on those two lines as the starting point and the constant refrain of the original of “Macavity’s not there”, Arthur Robins has again relied on the poem to create a wonderful lift-the-flap book encouraging young children to investigate just where this elusive cat might be. Is he in the bedroom? The bathroom? Perhaps the kitchen? Maybe the rabbit hutch? Ahhh- there he is! Why didn’t we think of there in the first place?

Using very distinctive illustrations, Robins brings Macavity to life just as he did in his 2014 version of the original poem by T.S. Eliot (http://thebottomshelf.edublogs.org/2014/10/04/macavity-the-mystery-cat/). But as well as engaging the young listener is the fun of discovering Macavity’s whereabouts, enticing them to suggest other places to look before turning the page, it’s a wonderful opportunity to explore language associated with cats – perhaps based on their observations of their own. Are they always sweet, playful fluffy kittens or can they be mischievous, cunning, aloof, even fierce? Using the cover picture, which words would they use to describe Macavity? Can you take a photo of a cat they know and surround it with vocabulary? Can you do a comparison chart between their cat, Macavity and other cats in literature?

Building their language and broadening their concepts about cats will be a great bridge to sharing the Robins’ version of the original and then travelling on to his Mr Mistofolees (https://www.allenandunwin.com/browse/books/childrens/picture-books/Mr-Mistoffelees-TS-Eliot-illustrated-by-Arthur-Robins-9780571322220) and Skimbleshanks (https://www.allenandunwin.com/browse/books/childrens/picture-books/Skimbleshanks-TS-Eliot-9780571324835) so they can savour the beauty of the rhyme and rhythm of Eliot’s creations, marvel at his ability to tell a story and paint a picture in so few words and maybe even enjoy a performance of Cats. At the very least, they will be introduced to some superb poetry that may linger with them throughout their lives, as it has with me!
Barbara Braxton, Teacher Librarian, NSW