Mannie and the long brave day 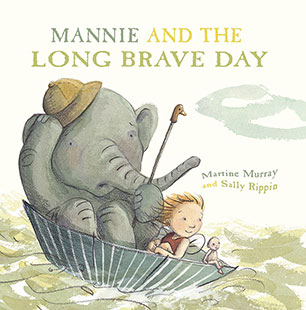 'Wait a minute! What's in the box?' In this sparkling story, a little girl going on a big adventure finds just what she needs in her special, magic box.

Mannie is going on an adventure. She's taking her favourite elephant Lilliput and her doll Strawberry Luca. And she hasn't forgotten her special box of secret things, just in case the adventure gets adventurous.

A magical story that celebrates friendship, courage and the wonder of a child's imagination.
More books by this author

Martine Murray was born in Melbourne, and still lives there. She has studied acrobatics, dance, yoga and writing. In addition to her three Henrietta books, she has written two picture books, illustrated one, and written three novels that have sold extensively overseas.

Sally Rippin was born in Australia, but grew up in many other countries including England, Brunei, Hong Kong and China. She has written and illustrated many books, including the 'Fang Fang' books. Her most recent books include Gezani and the Tricky Baboon by Valanga Khoza and The Rainbirds by David Metzenthen, which was shortlisted for the 2007 CBCA Picture Book of the Year Award. See also sallyrippin.com