Moo and Moo and the Little Calf too 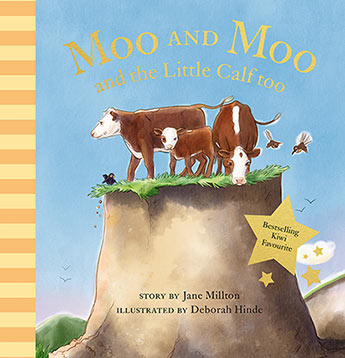 During the massive 7.8M earthquake that hit New Zealand in November 2016 two cows and a calf were stranded on a two-metre high 'island' when their paddock slid and buckled 80 metres from its original position.

Sensibly they stayed put and were rescued by farmers a day or so later. This story attracted huge media attention locally and around the world.

It's an iconic story of bravery in the face of great adversity, and of helping others and protecting those around us. It's also emblematic of the laconic Kiwi sense of humour and the strength of the New Zealand spirit when faced with chaos and crisis. It's a light point in the midst of devastation.
More books by this author

Jane Millton farms at Clarence River near Kaikoura and when this drama unfolded on her farm, she wrote this great story about it. Deborah Hinde is the illustrator of A Kiwi Night before Christmas as well as many other wonderful picture books for children.