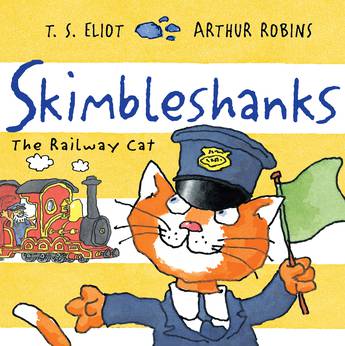 A wonderful new picture book version of one of T. S. Eliot's most popular cat poems from a timeless magical partnership.

We must find him or the train can't start!All aboard as Skimbleshanks, the Railway Cat, stars in the third picture-book pairing from Arthur Robins and T. S. Eliot's Old Possum's cats, set on the Night Mail train where Skimble won't let anything go wrong.To sit alongside other classics such as The Gruffalo, The Tiger Who Came to Tea, and Spot.
More books by this author More books in this series

Thomas Stearns Eliot was born in St Louis, Missouri, in 1888. He came to England in 1914 and published his first book of poems in 1917. He received the Nobel Prize in Literature in 1948. Eliot died in 1965. Arthur Robins is a renowned cartoonist and illustrator of over fifty books, including Little Rabbit Foo Foo.