Home>Browse>Books>Children's>Picture books>The Boy, the Bear, the Baron, the Bard and Other Dramatic Tales

The Boy, the Bear, the Baron, the Bard and Other Dramatic Tales 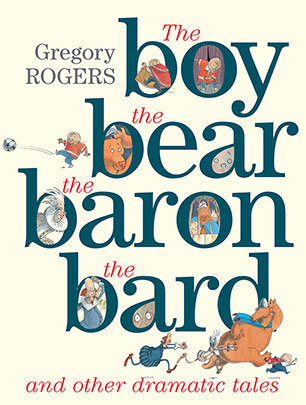 The complete set of award-winning wordless classics by a master of visual storytelling.

What happens when a boy bursts through the curtain of a deserted theatre and onto the world's most famous stage? Midsummer magic - and a chase through the streets of Shakespeare's London. And that's just the start of it.

Join the Boy and the Bear in three dramatic and captivating adventures:

The Boy the Bear the Baron the Bard, Midsummer Knight, The Hero of Little Street
More books by this author

Gregory Rogers studied fine art at the Queensland College of Art and worked as a graphic designer for many years before taking up freelance illustration. He was the first Australian to be awarded the prestigious Kate Greenaway Medal. Book 1 in the BOY BEAR Series, The Boy, the Bear, the Baron, the Bard, was first published in Australia in 2004. It has been published in the UK, France, the Netherlands and the USA, and was short-listed for many local and international awards including the CBCA Awards, Younger Readers and was selected as one of the Ten Best Illustrated Picture Books by the New York Times in 2004. Book 2 in the series, Midsummer Knight, was a Magpies pick of 2006 and a CBCA Notable Book in 2007, and the final book, The Hero of Little Street, was the winner of the 2010 Children.s Book Council of Australia Picture Book of the Year Award. Greg is much missed.

Download teachers notes for The Boy, The Bear, The Baron, The Bard

Download teachers notes for The Hero of Little Street