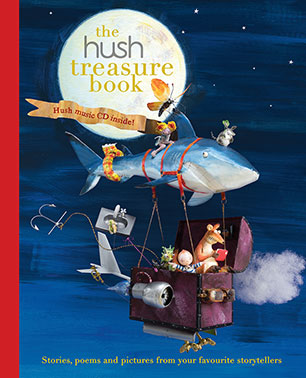 This absorbing collection of stories, poems and artwork by a stellar cast of children's book creators has been specially commissioned by the Hush Foundation. Includes bonus CD featuring a special compilation of Hush music compositions.

Welcome to the world of HUSH a world of magic, wonder and mystery.

Created for the Hush Music Foundation, famous for its original music albums used in hospitals all around the world, this book is a treasure trove that will delight and entertain the whole family.

A glorious collection of stories, poems and pictures from thirty favourite storytellers:

She decided more could be done to reduce distress and promote an atmosphere of healing and peace, so she brought together some of Australia's foremost professional musicians and composers with an inspiring vision. This network of talented individuals volunteered their time to create a collection of unique albums to help young patients and their families.

The result is HUSH's collection of musical albums, designed to inspire hope and calm in people of all ages. HUSH has provided the albums to every children's hospital in Australia and many internationally where it is used in treatment rooms, operating theatres and waiting areas. Now HUSH has expanded its work into another branch of the arts: this Hush Treasure Book is the result.

Dr Crock has received many awards for this work, including the 2014 Art Music Award for Individual Excellence for her contributions to music.