The Mystery of the Haunted Farm 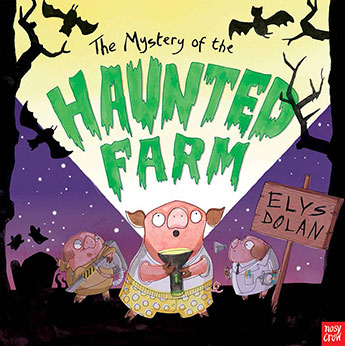 Strange and spooky things are happening down on the farm, and Farmer Greg knows exactly who to call - Ghost-hunters! From the author of the hilarious Weasels and Nuts in Space. Now available in paperback.

The three little pigs are the best guys for the job, a specialist team of Ghosthunters equipped with the latest in ghost-hunting gadgets. But when the Phantom Finder 5000 fails to recognise any paranormal activity AT ALL, the pigs realise all is not quite as it seems... and there's certainly something suspicious about the mysterious chicken coop up on the hill... could that be a werepuppy?
More books by this author

Elys grew up in a part of Sussex that consists almost entirely of trees and cows and she was named after a department store in Wimbledon. She's never let either of these things hold her back and Elys recently graduated with distinction from the MA in Children's Book Illustration at the Cambridge School of Art. Elys has been awarded second place in the Macmillan Prize and was also shortlisted for the Waterstone's 'Picture This'prize. Elys works predominately with ink, newfangled digital witchcraft and coloured pencils of which she is the proud owner of 178 but can never seem to find a sharpener. Based in Cambridge, when Elys is not drawing she grows cacti, collects pocket watches and spends altogether too much time in the company of other illustrators.