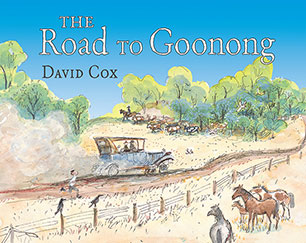 This glorious story of a bush childhood - growing up on the family farm with horses and animals, eccentric neighbours and a loving family - captures the enduring spirit of Australian country people.

The road to Goonong was just a pair of wheel tracks packed down by buggies and drays that had travelled that way over the years. It ran through forest and passed by farmhouses and the hut where the Schmidt boys lived. Goonong, our farm, was at the end of the road. We had beef cattle and dairy cattle, and there was plenty of room to play and plenty of horses to ride. It was a time when timber-cutters felled big ironbarks and blacksmiths' hammers rang out from the forge. The skies were always blue over Goonong.

With laid-back charm, bush humour and a spirit of optimism, David Cox captures the joy and freedom, as well as the harsh reality, of farming life during the Great Depression.
More books by this author

David Cox grew up in outback Queensland. When he left school, he followed family tradition and went to work on sheep and cattle stations. But when he was 21, David went to England to study at St Martins School of Art. While in his first year at the school, he was offered his first book illustration commission. David stayed in Europe for eight years. Back in Australia, he worked as an artist in the newspaper industry and wrote articles, book and art reviews. In 1978, he was awarded the Walkeley Award for newspaper illustration.

David began writing and drawing for children in the 1960s, with a series of three books about two children and their pony. He went on to become one of Australia's most prolific book illustrators. Several of the books he has written and illustrated have won awards and citations in Australia and the USA, including Ayu and the Perfect Moon and The Drover's Dog, and he has illustrated many books written by other people, including Captain Wetbeard.