The Tall Man and the Twelve Babies 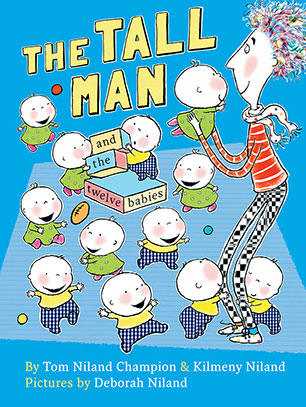 From a much-loved family team, this hilarious story is a riotous triumph of problem-solving.

in a tiny, tiny apartment,

All the boys were called Alistair.

All the girls were called Charlene.

One day the door slams shut ... with the Charlenes on one side and the Alistairs on the other. What will the tall man do?
More books by this author

Tom Niland Champion is a terrific new talent in the world of picture books, from a famous Australian literary family. He is the grandson of Ruth Park and D'Arcy Niland, and the son of Kilmeny Niland, with whom he originally collaborated to create The Tall Man and the Twelve Babies, now illustrated by his aunt, Deborah. His first book, Cindy-Ella, was an Australian adaptation of Cinderella.

Deborah Niland is one of Australia's most loved illustrators. Her wonderful depiction of the imaginary hippo in There's a Hippopotamus on Our Roof Eating Cake earned her the prestigious Leipzig Bronze Medal, and many of her other books have been family favourites for years.