There's a Bear on my Chair 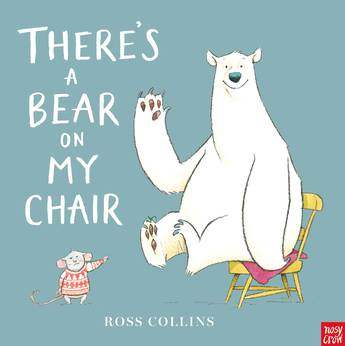 With echoes of Dr Seuss, this joyously illustrated picture book by a multi-award-winning talent is perfect for sharing.

Poor Mouse! A bear has decided to settle in his favourite chair, and that chair just isn't big enough for them to share. Mouse tried all kinds of tactics to move Bear, from glaring at him and scaring him, to luring him with a pear, but nothing works. Eventually, Mouse gives up. Once Mouse has gone, Bear gets up from the the chair and walks home. But what's that? Is that a Mouse in Bear's house?!
More books by this author

Ross' primary 1 teacher told his parents that he should go to art school. 13 years went by until he was finally 'old enough' to get into the Glasgow School of Art. On graduating he won the MacMillan Prize for his first picture book. Since then he's illustrated over 100 books for children and written a few of them too. Several of them have won enormous glittering awards which he keeps in a box in Latvia. Ross' book The Elephantom was recently adapted into a critically acclaimed play by those clever people at the National Theatre who made that 'War Horse' thing. When he's not creating children's books he enjoys working on character development for animation studios like Laika and Disney. He also likes walking in the Scottish glens with his dog Hugo, who is an idiot and his partner Jacqui, who is not.