This Girl, That Girl 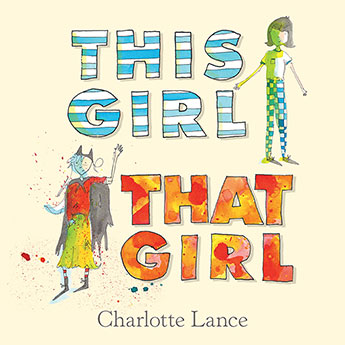 A gorgeous, clever and playful picture book about two girls who live next door to each other, but have completely opposite approaches to the world.

Even though they're next-door-neighbours, this girl and that girl are miles apart. Or are they?

One day, with a little help from their dads, they make a surprising discovery.

A funny and heartwarming story about this and that and everything in between.
More books by this author

Charlotte Lance has illustrated several children's books including A Really Super Hero and I Have a Dog (An Inconvenient Dog). The detailed worlds she creates have stories within stories and her illustrations are hilariously lively. As the mother of two wild boys she often draws on her everyday life for inspiration and hilarity. She also has the uncanny knack of creating scenes that truly come to life.

It would seem that never the twain will meet until one day both neighbours decide to build treehouses. While the dads may approach their process in very different ways each aided by their respective daughters who do likewise, the end results are both surprising and revealing! The vibrant illustrations and lavish use of colour and line add real liveliness to this book.
Recommended for early readers around Prep upwards.
Sue Warren, QLD

Neighbours who are so different - one demure, the other eccentric; one tidy, the other messy; one domesticated; one not so much. And each has a dad who is the opposite to who they are and each lives in a house that is not what you would expect. Miss Prim and Proper lives in a wacky colourful house complete with slides and rope bridges and a falling-down fence, while Miss Wild and Free lives in an orderly, symmetrical home reminiscent of a formal English mansion enclosed by a walled garden. Are they SO different that they can never be friends – or are the similarities that unite stronger that the differences which divide? The answer comes when both dads decide to build a treehouse – with the help of their respective daughters…

Vignettes on each page provide insights into the characters of each girl (and the patience of their fathers) and no doubt readers will recognise themselves in some of them and wish they could be like one or the other.

Author and illustrator Charlotte Lance says that the story was inspired by her two sons who are so different but regardless, they each get to where they need to be even if the route is different. But before I read the publisher’s blurb, as I read the story I was thinking that they were one and the same girl, each with an inner personality trying to break through. Did Miss Prim and Proper really, deep within, want to be Miss Wild and Free and vice versa? Or were they two separate girls determined to break free of their fathers’ influence by being the opposite of them? Perhaps those questions are way too deep for the intended audience of young readers but I do like books that pose such philosophical questions that can be explored and take the reader’s thinking to a deeper level.

Perhaps it’s just a fun story told in minimal text but maximum colour and movement about how personalities and talents can combine to produce a similar outcome – that despite the particular pathway we take, co-operation, collaboration and determination will deliver us to our destination. And that there is no right way or wrong way, no better or worse – just different. The ultimate message is the total love between father and daughter and their unquestioning acceptance of each other for who they are, even if it’s not quite the same as them. That has to be good.
Barbara Braxton, Teacher Librarian, NSW

This is this girl.
And that is that girl.

And so begins a charming and sometimes funny exploration of two very different neighbours. This girl likes to precisely measure out the table settings and vacuum up stray leaves in the garden. That girl likes to jump from window ledges and walk blindfolded along walls. And each girl has a father who is the exact opposite to her. But rather than this creating friction and angst, both sets of dads and daughters clearly love each other and enjoy spending time together. And through working together to build treehouses, each dad and daughter duo manages to make a treehouse that turns out exactly the same.

I had to concentrate hard while reading this book, as the number of ‘this’s and ‘that’s bordered on confusing at times. The book is a little smaller than the standard picture book size and some pages have multiple illustrations on them, making it hard to share in a whole-class situation. That said, I think it would be a useful inclusion in a small group discussion on appreciating similarities and differences or on families.
Kate Justelius-Wright, Wahroonga Public School, NSW

The simple text with colourful illustrations conveys an interesting visual story for both enjoyment and classroom discussion with children. The influences upon the girls in the two households is different, allowing children to see that as a child you can have your own interests, whatever your parent’s attitude. It also shows children that whatever your physical environment may be you can hold different ideas in your head and own physical and creative expression.

I think the book could also show parents that children should be respected for the choices they make, even if they are different to their own choices. Whilst the girls live next door to each other it is not evident in the story that they are friends. We see no games or communication between them. Perhaps this is because they live in a large city, which could be a discussion point for the classroom. They do end up with the same looking cubby houses but I cannot see why? Maybe children will help me see why?
I grew up in a small town so I don’t relate to this city attitude where people lock themselves away in their own place, even though I have listened to city dwellers expressing that they don’t know their neighbours. This attitude could lead to a discussion with children about friendships.

A practical activity at school could be to provide rope, bamboo, wood, paint, cardboard, coloured cloths, tile off-cuts, etc. to the children and allow them, in small groups, to select a place in the schoolyard to make their own cubby houses. This would be fun and allow children to see the many different ideas a group can have when building together. It will also lead to children seeing the importance of negotiating and working cooperatively together to achieve something together. A good lesson in life.
Diane Lucas, Part time teacher, Milkwood Steiner School, NT

This girl and that girl are next door neighbours and although they look a similar age, they have very different ways and interests. Their dads also are very different from each other. The book has very simple text and reading the words only does not make much of a story; the illustrations say it all.
The illustrations are bright and colourful with enough detail to spark many a conversation about similarities and differences. I love how each double page spread makes it convenient to do the comparisons.

The book shows the process of the two very different dads and daughters building a treehouse and the end result is remarkably similar depicting the idea that we are all humans after all and could always find common ground to connect with others.

In our school we have many ESOL parents and I shall be recommending this book as ideal for talking about the book with children in their own language. It is a delightful addition to our school library.
Claire Cheeseman, Teacher, Laingholm Primary School, NZ

At first glance, This Girl That Girl, by Charlotte Lance, looks deceptively simple – an easy read, even – but there is more to this story than just ‘this’ and ‘that’. Despite being sparely worded, the repetition of ‘this’ and ‘that’ is, at times, a lot to get your mouth around. I would suggest reading it aloud, slowly, so as to not mix up ‘this’ girl with ‘that’ girl!

The illustrations do all the talking, and boy, they have a lot to say! So much can – and must – be inferred from the pictures. They could inspire many classroom comprehension activities. What can you tell about ‘this’ girl based on how she is playing in the garden? And what does ‘that’ girl do differently?

These two girls are different but the same. Or are they the same but different? Students can create Venn diagrams showing ‘this’ girl’s and ‘that’ girl’s activities from the story. What do the girls have in common? Which character do students identify with and why? This could lead to discussions about diversity and values.

The illustration style is whimsical and detailed and shows these slightly off beat characters in a light-hearted manner. Students could create their own ‘this’ and ‘that’ characters using pencil and water-colour – just like those in the book. And, after reading this story, who wouldn’t want to design, label and possibly build a model of their ‘this and that’ tree house?

Which brings us to the end – ‘this girl and that girl’ coming together in all their paint splattered glory. Sometimes we want the same things but we have different ways of getting there. What a wonderful thing to celebrate. And ‘this’ book does ‘that’ well.
Jemma van de Nes, Karrinyup Primary School, WA