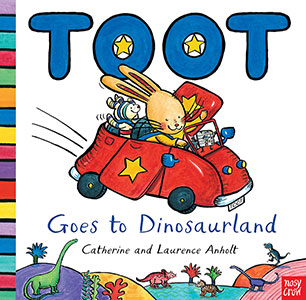 Toot's little car has a most unusual feature - it has a magical sat nav system! So, when he presses the special button, off he zooms on an adventure with his trusty toy puppy for company. But where will he go first? To Dinosaurland, of course! He meets dinosaurs of all shapes and sizes but, watch out Toot, there are some VERY big dinosaurs about!
More books by this author

Catherine and Laurence Anholt met when they were 18 years old. They went to art school together and between them they have produced more than 200 children's books, which are published in 30 languages around the world. The Anholts' books, which include Babies Love Books, the Anholt's Artists Series and the Seriously Silly Stories, have won numerous awards, including the Nestle Smarties Gold Award on two occasions. The Anholts have been involved with many literacy projects including the government funded Book Start scheme and this work has taken them inside Buckingham Palace and Downing Street on several occasions. They have also visited schools all over the world. Catherine and Laurence live and work in a sunny house with a big wild garden on top of a hill overlooking the sea near Lyme Regis. Here they have two studios, which are filled with paintings, sculptures and interesting things! Their three grown up children are Claire, who works for the UN in New York and twins, Tom, an artist in Berlin and Maddy, an actor in London.