A Pony for Jean 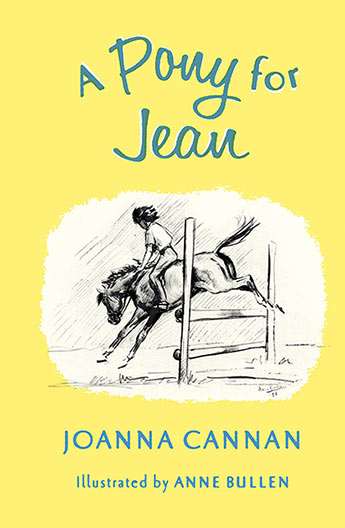 When her family fall on hard times, Jean and her family (including their dog Shadow) must move to the country. Not to worry though, as it seems they're going to live in a lovely little cottage, and Jean is assured she can have chickens. And perhaps even a new puppy...

Jean has never been to the country before, and is fairly sure she isn't going to like it. But she soon learns that the country is full of fun and adventures, and much more exciting than boring old London. Sadly her newly-discovered cousins are a bit haughty though, as well as pony-mad, and Jean wishes she could join in. But then a wonderful opportunity to do so arrives in the form of a pony named 'The Toastrack' (so-called due to his poor ribs sticking out so much) and Jean is told she can have him! The cousins are mean, and say a knacker's horse like that won't ever come to anything, but Jean and the quickly-renamed Cavalier know they can prove them wrong. Gymkhana glory is only a few jumps away!

Joanna Cannan (1896-1961)
Joanna Cannan was the author of thirty-eight books in a variety of genres. Brought up in Oxford, she was proud of her Scottish ancestry and spent holidays in the Highlands, where she came to love a life more adventurous than usual for girls of the time. During WWI she was a nurse and met and married Captain Harold Pullein-Thompson. He was wounded in the war and she shared in supporting their family, of their son Denis - who became a playwright - and their daughters Josephine, Christine and Diana. It was their life in the Oxfordshire countryside that provided the background to the family's well-loved pony books.

Illustrator Anne Bullen was born in Hampshire, but grew up in Somerset amongst horses and ponies. In 1933 Anne married and moved to Dorset where she brought up six children with her husband, Jack. Her romantic and versatile illustrative style caught the eye of Joanna Cannan, who gave Anne her first commission in illustrating A PONY FOR JEAN. Other authors followed suit, and Anne illustrated over forty books as well as three of her own. Anne and her husband also ran a very successful stud farm (The Catherston Stud), and although Anne very sadly died aged 51, she was able to watch her son compete at the Rome Olympics, the first of three Bullens to ride in seven consecutive Olympic Games.