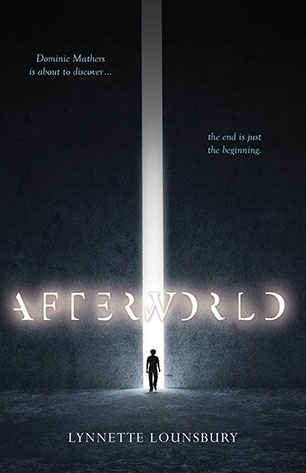 Dominic Mathers is about to discover that the end of his life is just the beginning. Hugely compelling, original adventure-fantasy, full of fast-paced action and intriguing ideas, from a brilliant debut Australian author.

Dom is the youngest person ever to arrive in the Necropolis, the 'waiting place' between death and what comes after. And it isn't long before he catches the attention of Satarial, a cruel Nephilim from the beginning of time, who has grim plans to use Dom as entertainment in his vicious gladiatorial games. When Dom's still-living sister, Kaide, appears in the Necropolis too, Satarial has the leverage he needs, and the stage is set for the biggest shake-up the afterlife has seen in centuries.

Dom's only option is to compete in the Trials and attempt to win the chance to enter the Maze. In his favour he has an enigmatic young Guide, Eva, and a Guardian, Eduardo, who may not be what he seems. But will they be enough?

'Lynnette Lounsbury has the power to raise your temperature. You feel it when she delivers you into a Delhi that is so percolating with heat and humanity that you will recall it not as a chapter in a book but a memory of having been there. You will feel it when she gives you that same certainty about her Necropolis, a realm of death that will have you sweating over the Trials and fates of her characters. There are mazes of every kind in here, as well as cruelty, nobility, Rowling-calibre imagination and some cracking, inventive ritualistic violence. You will be well-traveled by the time you have concluded Dominic and Kaide's epic journey through the AFTERWORLD. And then you will wonder how such an adventure managed to work in philosophy, theology, physics, metaphysics, the ties that bind beyond this life, addictions, devotions and some subtly lovely adolescent romance to boot. And the ending might be the most comprehensively hopeful thing you'll ever encounter.' - Chris Lynch, Michael L. Printz Honor winner
More books by this author

Growing up in Papua New Guinea gave Lynnette Lounsbury an appreciation of the mythical and the dangerous. Her earliest memories are filled with earthquakes, the smell of sulfur and stories about magic.

She couldn't decide whether to be a writer, an archaeologist or a fighter so she lectures in creative writing and ancient history and teaches Taekwondo. She has explored her passion for storytelling through travel articles, bridal magazine editorials and short stories and she is editor of the youth travel website Ytraveler.com.

Every year Lynnette volunteers in the South Pacific for an Ausaid program that gives Islanders the chance to study writing and drama. But perhaps her greatest adventure is closer to home . managing life with a husband who makes films and two boys who make trouble. They provide the inspiration and exasperation needed to get words onto paper.