Al Capone Does My Homework 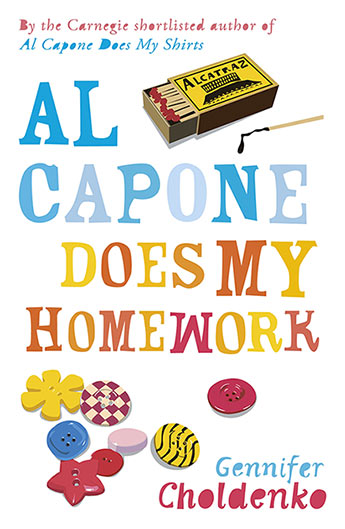 Al Capone is causing trouble for Moose Flanagan again - but this time, is it deadly?

Al Capone is causing trouble for Moose Flanagan again - but this time, is it deadly?

It's 1936, and Matthew 'Moose' Flanagan lives on Alcatraz Island.

His father's just been promoted to deputy warden - so Moose, his mom and his autistic sixteen-year-old sister Natalie are expecting to enjoy some new benefits, even if everyone says his dad's too nice for the job. The last thing they expect is for their apartment to burn down on his second day.

The tight-knit community of prison guards, their wives and their children are a mixture of welcoming and accusing - even the nicest people (heck, even Moose's mom) think Natalie probably had something to do with it - but Moose is sure she didn't. Nat's not dangerous, she's just... different.

Determined to prove his sister innocent, Moose and his gang of fellow 'inmate' children must work quickly to find out just who started the fire - and why. But what they aren't expecting is a note from an old 'friend' of theirs: Alcatraz's 'star boarder' and the most famous gangster in America - maybe even the world - convict #85. Al Capone...

Gennifer Choldenko was born in Santa Monica, California, and was the youngest of four kids, all of whom had big mouths. The only sibling who did not have the trademark Johnson big mouth was Gennifer's sister, Gina, who had Autism. Her parents worked very hard to try to figure out how to help Gina, but, as Gennifer puts it: being the parent of a child with severe Autism is like riding a unicycle in an earthquake.

Since she was the youngest, Gennifer spent a lot of time by herself making up words, stories, songs, and jokes, none of which made a lot of sense. After graduating from Brandeis University with a degree in English, she went to work in advertising, but stopped after realising that all of her work was beginning to sound like the that of a big mouth twelve-year-old... At which point she went to Art School, but instead of getting her portfolio together, she wrote her first novel (she does her best work when she's supposed to be doing something else). Follow Gennifer at www.choldenko.com or on Twitter: @choldenko