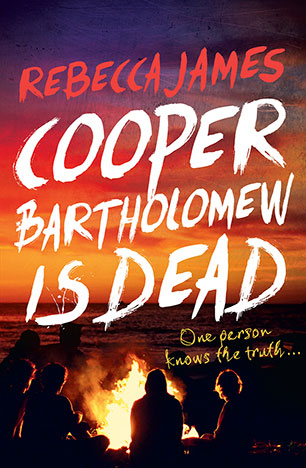 Why and how did Cooper Bartholomew die? Delve into the psychology of a group of friends and old enemies in this gripping novel from the author of Beautiful Malice and Sweet Damage.

Cooper Bartholomew's body is found at the foot of a cliff.

That's the official finding, that's what everyone believes. Cooper's girlfriend, Libby, has her doubts. They'd been happy, in love. Why would he take his own life?

As Libby searches for answers, and probes more deeply into what really happened the day Cooper died, she and her friends unravel a web of deception and betrayal. Are those friends - and enemies - what they seem? Who is hiding a dangerous secret? And will the truth set them all free?

A gripping new novel from the author of Beautiful Malice and Sweet Damage.

Rebecca James was born in Sydney in 1970. She spent her early twenties working as a waitress, her late twenties teaching English in Indonesia and Japan, and most of her thirties having babies and working as a kitchen designer. Her first novel, Beautiful Malice, was an international publishing sensation, selling in 52 countries. This was followed by Sweet Damage, published in Australia in 2013. Rebecca now lives in Canberra with her partner and their four sons.

A multi-chapter approach to the development of this novel has a wonderful impact on the reader. Short, sharp chapters intermingled with several longer passages allow for an engagement that this author does so wonderfully well. The use of past and present to align the narrative is an engaging strategy used by the author. The value of this style of writing is as a model for young readers to possibly emulate in their own attempts at fictional narrative.

Cooper is a teen bloke and central character in this novel. He possesses a calm character which so many other teens respect in both his close and wider social circle. After a terrible romantic interlude with Claire, Cooper has had to put up with the invective and backstabbing actions of his former girlfriend. Her drug infused states throw clouds over her self-centred attempts to win him back. This has impacts across his friendship group and the new relationship he was building with Libby.

There are several main characters that are in this construct. ‘Libby Bloody Lawson’, (as she is called by Claire), is a new part of Cooper’s life and attempts to reconcile his social life with their own relationship. Libby is a wonderful part of this complex situation of teen life with its expectations, confrontations and snitchiness! Claire plays a significant role in this novel and her character traits grate the nerves of any reader. This character delineation melds so well with the other people who had impacts on Cooper Bartholomew’s life. This included Sebastian. The description of his social, emotional and personal activities provides a twist as to where certain people fit into the life and death of Cooper. The death of Cooper is divulged early in the story but it is the development of the plot prior to this tragic event that embroils any reader in sets of emotions that are surprisingly massaged by Rebecca James.

Moving on after errors in life, is a theme that can be explored in so many ways and this novel certainly sets up a variety of avenues to integrate this theme into any reviews or investigation into the plot. Rebecca Jones has found a way to capture teen readers with the structure of this novel. Its fluency and gripping vocabulary ensures that any reader maintains an intriguing interest in the ensuing plots and action.Trevor Dangerfield, Elisabeth Murdoch College, Langwarrin VIC

Rebecca James is well-known for her gritty exploration of the teenage psyche and Cooper Bartholomew is Dead continues in this tradition. James employs both a multiple narrative point of view and shifting time which could prove quite challenging for some readers. Due to the age of the characters, the subject matter of the novel and the complexity of its structure, I would recommend this text for Upper School General English students, in particular Year 12 students.

The novel opens with Cooper’s interior monologue as he plunges to his death. After a brief period in the “Now”, the narrative shifts to “Then” and just like all effective thrillers, the reader must piece together what happened. The novel rapidly shifts between these two timeframes and between the narratives of Cooper, Libby, Sebastian and Claire. There are seventy shifts in perspective, but the narrative rests primarily with the voices of Cooper and Libby who are constructed as sympathetic characters and hence their values are the ones endorsed in the text.

Like James’ other novels, the central concern of the text is the destructive nature of secrets and how they destroy the lives of all affected. The novel offers an interesting insight into the psyche of contemporary Australian teenagers and the world in which they inhabit. It would prove worthy to analyse the representation and role of parents in the novel as their actions (and inactions) directly impact on the actions of these teenagers.
Lisa Black, English Teacher, Kelmscott SHS WA

With the subtitle firmly emblazoned in my mind, I relished the exhilaration of a good read. The initial pace was slower than expected. The Rashomon Effect, adapted for the narrator’s voice, let the reader into the mind of each of the four primary characters and gradually let us piece together the relationships, backgrounds and personalities involved. A novel sure to capture the interest of teenagers, Cooper Bartholomew is Dead is constructed in bite sized chunks, no consecutive chapters through the same character’s eyes. Keeping the reader on their toes in this manner helps drive the pace, particularly toward the end of the novel; the rise of tension leading to the climax is beautifully crafted.

It is a clever novelist who can hide the perpetrator … indeed, if there is one, until the plot resolves. Rebecca James has done just that. The teaser scrawled on the cover, “One person knows the truth…” is enough to pique your curiosity. The multi-voiced form of narrative is becoming more common. With a raft of this genre available, this novel lends itself to the study of the text as a construct; exploring the impact of positioning the audience through context and assumed information – even misinformation – as each character contributes to the plot. In conjunction with that the class can scour the novel for consistency of character through voice register, tone, diction and so on; how much of the character is revealed through what and how they do or say things. Dividing the class into groups, one for each character: Seb, Libby, Claire, Cooper; and as an adjunct, a group for Then and Now where students investigate the time lens in writing. A fabulous text for a Grade 10-12 group; suitable for a range of ability levels.
Michael Cruickshank, Hellyer College, TAS