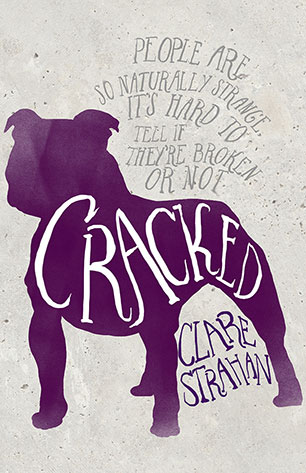 A wonderful debut novel that captures the essence of real, messy teenage lives: of action and consequence, of poor choices and fragile friendships, of standing up for what is right, and the attempt to make sense of a world when everything feels like it's falling apart.

I'm pretty sure that by the time I finish high school, I'll be cracked into a pile of shards, beyond repair.

At fifteen, Clover is finding the going tougher than she expected. Her life is close to being derailed on the rocky terrain of family, friendship, first love, acts of defiance and a planet on the brink of environmental disaster. So when Keek breaks his promise to her, and school sucks, and her mother is impossible, and her beloved old dog is dying, and her dad is in the wind, and the girls at school are awful and the footy-boys are bullies and she's arrested for vandalism - well, what else can she be but a little bit broken? Can Clover pull herself together - or will she spiral further out of control?

When life feels like it's fracturing, how do you find a way to feel whole?
More books by this author

Clare Strahan is a Melbourne writer who once rattled out a novel on a manual typewriter by candlelight. She is also a drama tutor with a passion for Shakespeare, a graduate of RMIT's Professional Writing & Editing, a writer of fiction and poetry for humans of all ages and has published in Overland, where she curated their first fiction anthology and volunteers as a contributing editor. She is a freelance editor, creator of the Literary Rats cartoon, and flutters about the twittersphere as @9fragments.

This is an Australian novel that will resonate with many teenagers as the main character, Clover, struggles with some issues that many young people will find familiar. Clover has an embarrassing family, dislikes many aspects of school and suffers the consequences of poor choices in various areas of her life. The strengths of this novel lie in the great characterisation and Clover is a wonderfully appealing and realistic girl. Written in first person, we have an insight into Clover’s motivation for her statements and actions and her reflections on the situations in which she finds herself give us an understanding of how she ended up in those predicaments. Many students (and teachers) will find various scenes of the novel very recognisable and the relationships are described in a realistic manner. The access to Clover’s thoughts creates a well-rounded character and we can understand why she is a ‘misfit’ in her school.

Cracked also provides a platform for challenging students to consider issues such as homophobia or the tendency of people who claim the right to ‘shame’ those they see as transgressing moral standards. Because of the well-written major and minor characters in this book, issues could be examined in a sympathetic manner because students will feel empathetic towards the characters. Teachers can also use these situations and characters to encourage students to look beyond the stereotype and see the implications of censorious behaviour that is prevalent in society.

However, the novel does have some weaknesses and these may create some limitations in a classroom situation. The plot has a few detours that detract a little from the main focus of the novel and could cause readers to lose interest, although most will persevere because of the quality of the characters. Some schools may also have an issue with the obscene language in the novel, particularly if used with a younger age group. Overall though, Cracked will be popular with students in their early to mid-teens and older.Bernadette Dell, Year 12 Coordinator, Mercedes College, Perth, WA

There is much to like about Clare Strahan’s novel Cracked. The narrator, Clover, who is fifteen years old, tells us at the outset of the book that she has been struggling since she was eleven. Able to conceal to her ongoing problems to those around her, we meet her in Year 10 at Fernwood Secondary College. Her unusual mother, who directs a local Shakespeare production, doesn’t allow Clover to access Facebook, and longed for her daughter to have a Steiner education, but couldn’t afford it, is the cause of many of Clover’s problems. She is, according to Clover in the first chapter, “a zombie, a deflated balloon; empty: like our fridge”.

Many teenagers, for whatever reasons, will be able to relate to the narrator’s feelings of being the odd one out and her issues at school. Clover is artistic and uses her art in the form of graffiti to act out her youthful rebellion and protest against the planned freeway in her neighbourhood.

There are some problems, however. At times, the characters’ actions strain credulity and, although the author uses a recent real-life situation such as the building of a freeway in the outer eastern suburbs of Melbourne to ground the novel in reality, she plays a bit ‘fast and loose’ with the facts. This also damages the credibility of the narrative somewhat but this probably wouldn’t matter for a teenage reader. Certainly the novel raises many issues that would be relevant for most teenagers and, despite Clover’s situation being quite specific, her feelings would be familiar to most readers.

Using Cracked as a classroom text could open up the possibility of some worthwhile discussion about a range of behaviours that are generally considered socially unacceptable and the consequences that might follow as the result of engaging in them. It is a story that many young readers would enjoy and be able to relate to.
Deborah Huismann, English Teacher, Melbourne Girls’ College, Richmond, VIC

Cracked is a book I would recommend for parents of teens. It gives a broad overview of urban teenage life, and the lengths that teens go to in order to fit in and be socially accepted. Strahan clearly explains how parents impact the lives of our children. The novel includes drug and alcohol use and depicts casual sex as a normal part of any party. The casualness with which this is treated is alarming but honest.

The constant mocking of Steiner Education was entertaining at the beginning but became monotonous and irritating by the end. As no explanation or description of this style of education is included, many of the comments fall flat or have the reader heading off to Wikipedia for clarification.

Clover is an interesting and complex character with many contradictory qualities. She is artistic, creative and spontaneous whilst also being reckless, irresponsible and selfish. Clover has never fitted in and is willing to sacrifice her true self and her relationship with her mother to achieve this most sought after of teenage goals. Her relationships with other teenagers, mother, teachers, popular kids at school and Keek are well explored and often very touching.

The plot is rather loose and tends to be untidy; it becomes a series of events or incidents which are connected but not cohesive. The ending seemed unconvincing: when everything gets too difficult, pick yourself up and move away, leaving all your problems behind.

Cracked would be a good text to study with students the same age as the character. It easily expands to include a social commentary on not just alcohol, drugs and relationships but legal issues such as graffiti and protecting local green spaces. It could also lead to a very interesting conversation about the place and value of art in our society and its use in political and social campaigns. Another study focus that could be drawn from the text is the impact of mental illness on a family. Keek’s story is sad but not unique and the depiction of his mother is honest and heartbreaking.
Sue Nash-Skinner, Preshil, The Margret Lyttle Memorial School, VIC