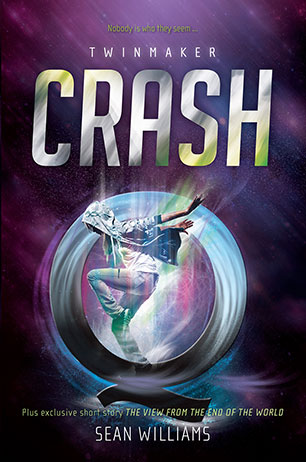 Clair and Jesse have barely been reunited when the world is plunged into its biggest crisis yet . It's the end of the world as Clair knows it - and it's partly her fault. A brilliant science-fiction thriller, the second in the Twinmaker trilogy. This edition includes a bonus short story.

If you betrayed a friend, how far would you go to earn their forgiveness?

If someone had saved your life, would you risk your life to save them?

If you could bring someone back from the dead, who would you choose?

Clair and Jesse have barely been reunited when the world is plunged into crisis - the d-mat network is broken. People are trapped, injured and dying, and it's partly Clair's fault.

Peacekeepers enlist Clair to track down Q, the rogue AI - artificial intelligence - who saved her life and is the key to fixing the system. Targeted by dupes and abandoned by her friends, Clair finds powerful allies in the most unlikely places. But who can she trust? Q won't respond to her calls for help, and if Clair finds her, will she be trapping her friend in a life of servitude or sending her to death by erasure?

Caught between pro- and anti-d-mat philosophies, in a world on the brink of all-out war, Clair must decide where she stands - and who she stands with - at the end.
More books by this author More books in this series

Sean Williams was born in the dry, flat lands of South Australia, where he still lives with his wife and family. He has been called many things in his time, including 'the premier Australian speculative fiction writer of the age' (Aurealis), the 'emperor of sci-fi' (Adelaide Advertiser), and the 'king of chameleons' (Australian Book Review) for the diversity of his output. That award-winning output includes forty novels for readers all ages, ninety short stories across numerous genres, the odd published poem, and even a sci-fi musical. He is a multiple recipient of the Aurealis and Ditmar Awards and has been nominated for the Philip K. Dick Award, the Seiun Award, and the William Atheling Jr. Award for criticism. He received the 'SA Great' Literature Award in 2000 and the Peter McNamara Achievement Award for contribution to Australian speculative fiction in 2008, and he has recently completed a PhD on matter transmitters.

I was captivated by the first instalment of the Twinmaker Trilogy, Jump, and was consequently eager to sample the next offering in the series by acclaimed South Australian author Sean Williams. In Crash, Williams continues to follow the story of Clair as she is pursued by dupes whilst continuing to seek the truth about D-Mat and track down the elusive Q. Crash has a similar energy to the first episode, although this time I did find the constant chase across the globe and resurrection (and re-resurrection) of minor characters wearisome at times. Crash adds a host of new characters to the mix to further complicate the plot. Of particular note is the rather mysterious Devin and multi-talented PK (Peace Keeper) Sargent, both of whom keep the reader guessing as to their motives.

The relationship between Clair and Jesse continues although it was a disappointment that my understanding of Jesse failed to deepen with him as he was still a little underdeveloped. Williams continues to make thought provoking and insightful statements related to the role of technology in the modern world. However, I did not feel that in Crash he added any additional ideas to those that were introduced in the previous volume.

This is a very long and somewhat dense novel when one considers that it is aimed for the Young Adult audience. Regrettably, this probably places it outside the interest level for many of the adolescents I teach. Furthermore, its length may restrict its use in the classroom. On a more positive note, excerpts of the text might provide valuable insights and a discussion point for use in the Science classroom, particularly those touching upon ethics as they relate to technology. Overall, a fast-paced novel with equal measures of energy and intrigue, well suited to Science Fiction devotees within the upper age bracket of the Young Adult genre.Tanya Grech Welden, Secondary English Teacher, Gleeson College, SA

The story continues in this second instalment of the Twinmaker series. Despite not having read the first novel, I found it quite easy to pick up the events that preceded the action in this book. And full of action it is. After catastrophic events, Clair and Jesse have returned to an Earth radically changed by the destruction of dmat - an instantaneous mode of transport. Society is beginning to crumble as humans have to return to old methods of transportation and governance. The action is fast-paced and it is the younger generation that are having the greatest impact on the future of humanity. There are a huge number of societal, philosophical, political and more issues that are covered throughout the story that could be utilised in class. It is also a fun, fast read that is sure to appeal.
Peta Harrison, Teacher Librarian, Albany Senior High School, WA