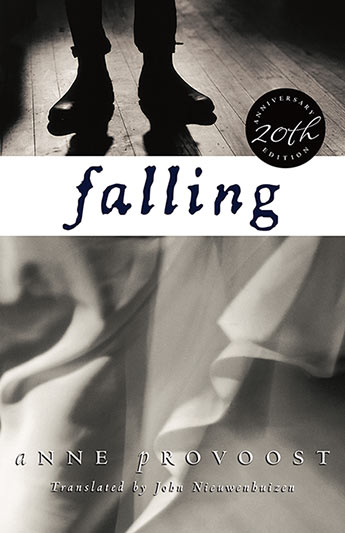 A powerful, disturbing book about racial tensions, intolerance, and the seductive appeal of right-wing extremism, this story explores the difficult pathways of love, fear, anger and forgiveness.

Through the long, oppressive summer after his grandfather's death, Lucas becomes aware of dark secrets surrounding the old man's activities during the war. Yet no one will speak openly to him about what happened all that time ago. Meanwhile, racial tension is growing in the neighbourhood, and Lucas is increasingly drawn to Benoit, a smooth-talking extremist who advocates action against migrant workers. And then there's Caitlin - captivating Caitlin - with her beautiful, sad dancing and her strong opinions.

When tragedy strikes, Lucas must face a terrible choice.

Falling is a gripping, disturbing book about the seductive power of extremism, the gulf between intentions and consequences, and the need to understand the past and take responsibility for one's actions.

First published in Belgium, Falling has won six major international literary awards, topped bestseller lists across the world, and been translated into many languages. This 20th anniversary edition of the highly acclaimed classic shows that its themes of racism, neo-fascism and immigration are still as relevant as ever.

'Falling is a classic rite-of-passage novel...deeply imbued with themes of the interaction between the political and the personal...[A] challenging study of personal awareness, motivation and responsibility.' The Age

Belgian writer ANNE PROVOOST is the author of a series of provocative novels that examine topics as varied as right-wing extremism, sexual abuse, and religion through the eyes of young protagonists. Falling was made into an English-language feature film. Anne is a member of the Royal Academy of Dutch Language and Literature and a member of PEN. Her novels have been published in eighteen different languages.

JOHN NIEUWENHUIZEN is an Australian-based, award-winning translator of Dutch and Flemish literature. In 2007, John was awarded the NSW Premier's Translation Prize and PEN Medallion. In 2015 he was recognised with an IBBY Australia Honour Book award for Translation for his translation of Nine Open Arms by Benny Lindelauf.