Lost Stars or What Lou Reed Taught Me About Love 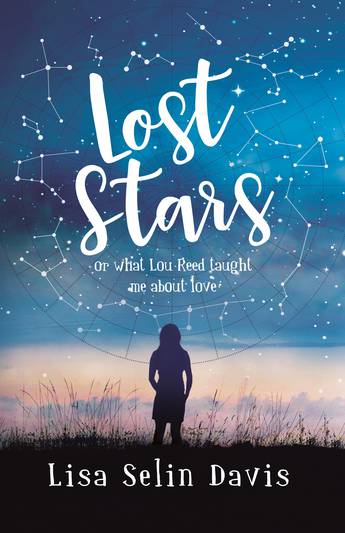 In the aftermath of her older sister's death, sixteen-year-old Carrie is taken under the wings of her sister's friends, and finds herself forsaking the science nerds of her former life and slipping into a daze of cheap beer and recreational drugs. Carrie - a talented guitar player and obsessive tracker of the coming Vira comet - is partying hard and fooling around with boys she doesn't even like, even though she's desperate for a boyfriend.

Her mother, enveloped by grief at the loss of her eldest child, has retreated to a monastery in the Catskills that requires a vow of silence. With her family splintered apart, Carrie is overcome at times by uncontrollable rages and her father decides to send her to a boot camp for wayward teens. Compounding the shame, and to her horror, she is forced to wear work boots and a hard hat - boy poison.

Then she meets Dean, a fellow musician and refugee from his own dark past. Throughout the summer Carrie learns more about Dean, about her sister's death, about her own family's past, and about herself... as well as about the Bee Gees, disco and the difference between wood and sheet-rock screws. Through love, music and her precious comet - and no small help from Lou Reed - Carrie fumbles her way through the complex web of tragedies and misunderstandings, to the heart of who she is and who she wants to be.
More books by this author

Lisa Selin Davis is originally from Saratoga Springs, N.Y., where she spent summers playing and listening to music with her (older) friends and riding her bike. She has written articles for The New York Times, The Wall Street Journal, Timemagazine and many other publications. She lives in Brooklyn with her husband, two kids, and a very old cat. Follow Lisa on Twitter: @LisaSelinDavis