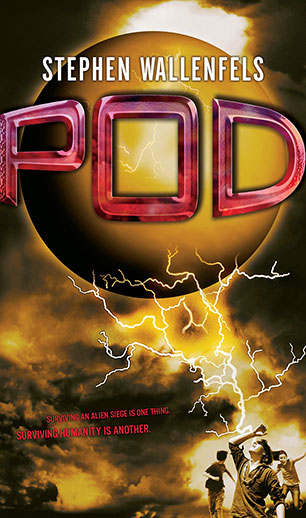 A cross between The Day of the Triffids and Tomorrow When the War Began, POD is a brilliant page turner - an action thriller, featuring two memorable characters dealing in very different ways with the disaster of an alien invasion.

I'm all cried out. I'm still alone. The sky is full of giant spinning black balls that kill anyone stupid enough to go outside. Now I sit in the car, staring out the window like a rat in a cage.

When the cataclysm strikes, twelve-year-old Megs is trapped in a hotel carpark in LA. Across the country, sixteen-year-old Josh is stuck in his home with his increasingly obsessive-compulsive father. Food and water and time are running out. Will Megs survive long enough to find her mother? Will Josh and his father survive each other?

Stephen Wallenfels is a freelance writer living in Washington state. POD is his first novel and he is currently working on POD 2.

Pods, or alien spaceships, appear suddenly and without warning in the sky. The pods hover above the city in large numbers and anyone outside is ‘deleted’ by the invaders. What follows is the story of 12 year old Megs who has become separated from her mother and is trapped in a hotel car park and 16 year old Josh who, together with his father, are confined to their home for the month long occupation of their city. POD is a story of survival; of Meg who shows bravery and resourcefulness as she attempts to locate food and water in the car park and tries to evade men who have exploited the situation and are holding people in the hotel hostage. Meanwhile, Josh and his father develop innovative ways to survive in their home as the water, electricity and communications are cut off and supplies of essentials such as food and toilet paper run low. At times, Josh’s attitude towards his situation is rather complacent and he is all too ready to criticise his father, making Josh’s attitude and behaviour irritating to the reader at times. However, Josh’s character flaws may appeal more to the author’s target audience. This young adult book is at times, full of suspense and intrigue. Its book cover that is metallic gold in colour is striking. The story raises many questions such as why the pods invaded, why without warning they leave after a month or what the function of the alien fog is that appeared one day. These and other questions are not properly answered in the novel leading to the speculation that a sequel may be a possibility. POD is a great science fiction book for teachers and teacher-librarians to recommend to their students.
Catherine Duffett, Claremont College, TAS

When they arrived he was asleep in bed and besides his dog Dutch the only other person in the house was his over obsessive father. He was expecting to sleep for at least another hour before he had to drag himself out of bed and get ready for school. He expected to meet up with his best friend Alex. Instead he was dragged from his sleep by a head splitting screech and the presence of black spheres in the sky.
When they arrived she had just said goodbye to her mother. She was awoken early by her mum leaving for work, she would be back soon and then they would head to the beach. She had never seen the beach before. She was left alone while her mother was gone. She was left alone when they arrived. All around her people were in a panic while she sat alone and waited her head exploding with noise and the sky fill with blinding flashes.

POD is a tale of two people facing a world in chaos. Josh is trapped in his home with only a father slowly driving him crazy, spending his days watching the world outside his window slowly fall apart. Megs is left alone in a hotel car park amongst strangers spending her days struggling to survive, watching as her world falls down around her. When an alien force takes over the skies it is the threat from those on the ground that is the greatest. An absorbing and stirring read that is original, frightening and a little heartbreaking.
Larissa Chapman, NSW

The world has been invaded by aliens, they arrive at 5 am one morning with an ear piercing screech, their massive ships hang in the sky, an electromagnetic pulse takes out all the electronics and communications and any human venturing out doors is zapped in a blinding white light; who knows what has happened to them. The story is told from the perspective of two teenagers, Josh, 15 almost 16 at home with his father in a small town in Washington State and Megs, 12, waiting for her mother to return to their car in the parking garage of a hotel in Los Angeles. The ships are large shiny spinning spheres that just hang in the sky, nothing comes out of them, and no one knows what they want. Josh, his father and dog Dutch watch from their home as the any human outside vanishes before their eyes, cars, aircraft, bicycles are no protection but being inside a building is, but it only seems that humans are zapped, animals are not of interest to the aliens. The only thing they can do is collect as much food and water as they can find and hope they can survive whatever is coming. Josh dubs the space ships PODs and his father starts keeping a record of what they do and how many there are. Megs is cuddled up in a sleeping bag in her mother’s car when she hears the ear piercing screech of the alien ships, pandemonium erupts around her, people start running out of the hotel and getting into their cars, wanting to get away as fast as possible. There are collisions in the parking garage in the rush to get away but as the first cars drive out of the building they are zapped by the space ships, even more panic erupts, people run back into the hotel. Megs decides to stay in the car because that is what her mother told her to do. Megs eventually leaves her car in search of supplies, she hides when she hears other people come out of the hotel also looking for anything useful in the parking garage, something scary is happening in the hotel, she decides it is safer to stay in the parking garage and fend for herself.

This story grabs you from the very first page and I feel it will be extremely popular with students, both boys and girls, the use of different fonts for Josh’s story and Megs’s story is very effective. I hope Stephen Wallenfels has the next book well on the way because students will be clamouring for the next instalment as soon as they finish this one. I enjoyed this book very much and I want to know what will happen next.Jan O’Sullivan, Library Technician, Mooroolbark. VIC

Let me be very clear about this book. I loved it. I could not put it down once I opened it. This from a tired-out, overworked, underpaid, and slightly eccentric primary school teacher ... a total first! Testament to the story within. Life as it is known by the human race is over. An alien invasion of PODS (PEARLS OF DOOM) has arrived on the earth, eliminating humans faster than a speeding bullet. Terrible screeching sounds and mini-podlets are part of the day to day life, a strange mysterious fog that cannot be explained, and no-one is safe or convinced of a return to normalcy. Megs and Josh tell of the invasion from their very different points of view. Megs, alone, fighting to stay alive amongst the debris of a multi-storey car park, inhabited by thugs and looters, dead bodies, and unbelievably, a kitten. Josh is holed up in his home with his father, whilst his mother is absent. Each character demonstrating remarkable and believable resourcefulness in a time that is anything but normal.

This post-apocalyptic science-fiction novel would be suitable for readers 13 plus. Both boys and girls would get a great deal from this story in terms of entertainment (hey, it's a jolly great story) but also in terms of looking at humanity and how it behaves in the wake of a crisis. The book opens many doors for discussion, such as...why do people loot, rape and pillage? Why does a father give up so much for his son? How do humans behave in unfamiliar situations and why?

I loved that the book had a wonderful tie-in at the end (no, I won't spoil the surprise) but must also mention there is a very sad part, showing how far a father will go for his son. The books finishes in a suitable, satisfying way, leaving enough openings for a sequel...yet also allowing the reader to feel fulfilled that all has ended in a logical way. As I said at the start, this is a terrific book and the one I have most enjoyed so far this year. Five thumbs up!Francesca Tulk, TAS

POD is a fantastic read. Gripping, edgy and another in the genre of speculative (dystopian) fiction that our students love to read. Aliens have invaded the earth using mysterious giant black balls (that Josh calls ‘Pearls Of Death’ or PODs). Anyone who steps outside their building is immediately ‘zapped’. No-one is sure what happens to the people but it means that everyone is trapped inside. Questions abound. How can they survive? How long will it continue? Will the food and water last? How do people really react in such circumstances? This is the nub of the story. The invasion is merely a catalyst to exploring human behaviour. Josh is trapped inside his home with his father in Washington. His mother is missing; his father obsessively plans for imminent death, and he wonders if the neighbours really did eat their dog. Megs, in another city, has been left by her mother in a hotel car park. While she tries to survive the invasion she faces an even great threat from hotel staff turned feral; they want power and resort to atrocities to achieve it.  These parallel stories quickly draw you in. Josh is your typical teenager and his story essentially revolves around the father/son relationship. Megs is streetwise and the gutsy way she tries to cope has you turning pages quicker than you can imagine.

Characters and Questions:
Use a pack of cards with different characters and divergent questions.
Students choose a character and a question card and make their responses.
Question Examples: