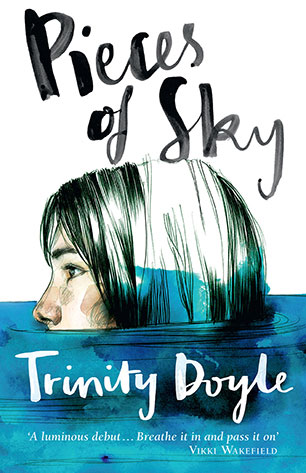 A strong atmospheric novel about Lucy, a sixteen-year-old competitive swimmer in a coastal town who is grappling with a fear of water after the untimely death of her surfer brother.

Lucy's life was going as smoothly as any teenager's could. She was the state backstroke champion, and swimming obsessed. She lived with her parents and her brother, Cam, in the small coastal town she'd known all her life. She had friends, she had goals - she had a life.

Now Cam is dead, her parents might as well be - and Lucy can't bear to get back in the pool. All she has to look forward to now is a big pile of going-nowhere.

Drawn to Steffi, the wild ex-best-friend who reminds her of her artist brother, and music-obsessed Evan, the new boy in town, Lucy starts asking questions. Why did Cam die? Was it an accident or suicide? But as Lucy hunts for answers she discovers much more than she expects. About Cam. About her family. About herself.

A soaring, uplifting novel about love and loss from an exciting new voice.

Trinity Doyle writes realistic young adult fiction. She grew up in the suburbs of Lake Macquarie and could be found reading at all times - except when she was watching TV, getting her hands black with charcoal or making mixtapes from the radio.

Trinity lives in Newcastle NSW, with her husband, daughter and cat. The Australian Society of Authors called her work 'edgy [and] convincing' and she thinks that's pretty neat. Pieces of Sky is her first novel.

Visually this novel’s cover is not overly appealing. It has a black and white cover with some shades of blue, which attempts to reflect the water and Lucy’s association with swimming. However, students may be enticed to read it if they turn the novel over and read the blurb. Judging the book by its cover in this case, would be the wrong choice to make. This novel is extremely well written and one that most students wouldn’t put down. Doyle has an ability to draw the reader in, by making them want to know more about Lucy (the female protagonist) and her brother’s death while he was surfing. The novel sets up many questions that remain unanswered till the end of the novel, will Lucy’s parents overcome the loss of their son, who was Cam’s mysterious female friend, will Evan move back to Sydney, which boy will Lucy pick, will Lucy ever get back in the pool again.

The novel has a variety of themes and issues for use in the classroom; families, loss, suicide and mental health, love and relationships, fear, etc. However some of these issues are very sensitive and need to be addressed tactfully and appropriately within the classroom. I definitely wouldn’t use this novel in the junior school. Positives include the fact that this is an Australian novel with an Australian setting. Contextually and in regards her audience Doyle understands teenagers, their language and their mannerisms. I recommend reading this novel yourself before purchasing a class set for classroom use. There are many alcohol and drug references. At times it seems the novel is presenting alcoholic teen parties and drug use as the norm amongst teenagers and that this is acceptable.
Jodie Webber, Hurlstone Agricultural High School, NSW

Actions have consequences and not just for you. Lucy's brother Cam decided to go surfing during a storm. He may have been drinking or taking drugs before making that decision and the consequences are tragic. Whether Cam's death was accidental, recklessness or suicide, his decision to surf in the storm changed the course of many lives. Lucy's parents are dealing with their grief as individuals and an Aunt has moved into the family home to help out. Lucy can no longer face competitive swimming. Her swimming friends and everything that is familiar is gone. Nothing makes sense anymore.

Much of the novel is about Lucy's desire to understand her brother's action, and to balance the behaviour with her perception of him. The ease with which Cam was able to have a secret life is disturbing for a sister who felt she knew him well. The mystery of the unknown girlfriend and the lies about other relationships leave Lucy with strong doubts as to whether she knew her brother at all.

Undiagnosed mental illness in young people is a common societal problem and family history is one of the key indicator. Cam was displaying behaviours of depression that were simply considered teenage angst. With a family history of mental illness it seems improbable that the symptoms would be ignored.
As a novel to study, Pieces of Sky offers many discussion points; how well do you really know someone? Mental illness, choices and the impact they have on not just yourself but others as well. It is an accessible text that would be enjoyable to study.