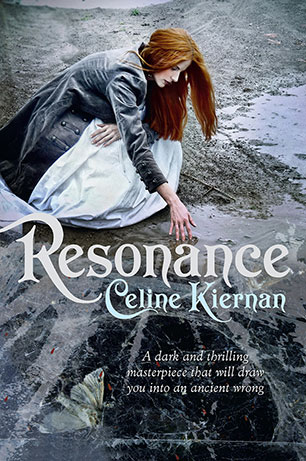 What does it mean to be alive? What is it worth to stay alive?

Ireland, 1890: two ruthless immortals prowl the theatre district in search of food for their 'Angel'. Ancient, pitiless and caring for none but their own twisted family, they will stop at nothing to maintain their grip on life.

A seamstress, the young man who loves her and a penniless American magician soon find themselves imprisoned in a snow-bound country estate, the latest additions to the family's warped collection. Here, they are nothing but food, nothing but entertainment, and soon they will be nothing at all.

Far from their homes and fighting for survival, Tina, Joe and Harry will come to understand that far more is at stake than their lives.

A rich and provocative feat of the imagination from the creator of the Moorehawke Trilogy.

'In Resonance, Celine Kiernan blends the supernatural, sci-fi and romance to superb effect: highly regarded, her work is considered as compelling 'and unsettling as Poe's ghastlier moments'.' The Saturday Independent, Ireland

Born and raised in Dublin, Ireland, Celine Kiernan has spent the majority of her working life in the film business. She was trained at the Sullivan Bluth Studios, and her career as a classical feature character animator spanned over seventeen years. She spent most of her time working between Germany, Ireland and the USA.

Her popular Moorehawke Trilogy has been internationally acclaimed, and her novel Taken Away was the first book to ever take out both the Children's Books Ireland Book of the Year Award and Children's Choice Award in a single year. For more information about Celine, see her blog: celinekiernan.wordpress.com.

Resonance by Celine Kiernan is a complex and thought provoking novel that blends historical fiction, paranormal and science fiction in a compelling and engaging way. Set in a richly detailed and evocative Ireland in 1890, it follows the extraordinary fortunes of three young people. Tina is a seamstress at a Dublin Theatre who keeps her psychic abilities hidden for fear of being institutionalised. Joe, her lifelong friend and cab driver who suffers terrible abuse at the hands of his family, and Harry a young American magician who comes to Dublin to further his career, but who finds himself destitute in a foreign country. Our young protagonists find themselves unwitting pawns in the schemes of two mysterious men who kidnap them and transport them to their remote country estate. These men, Cornelius and Vincent have their own story, told in flashback throughout the book, which details their early adventures. You soon realise that these men are centuries old and the account of how they came to be in possession of the estate, complete with the angel whose powers prolong their lives, and the lives of the others who reside within the boundaries of the property is haunting. Immortality is shorn of its glamour, and is presented as a dull, unceasing mourning for that which has been lost. They are in effect trapped on the estate with no hope of growth or change, cut off from their humanity, and increasingly distant from each other.

The narrative benefits from being told from the perspectives of the many characters. You get a true insight into the thinking and reasoning of all the protagonists, from the resourcefulness, resilience and courage of Tina, Joe and Harry to the amoral but tragic immortals. This device also allows the many mysteries to slowly unfold, not the least being the nature of the 'angel' who is held captive in the cellars of the manor house.

This story is not for the faint hearted. There are truly horrific moments, especially when dealing with the twin children who are cold blooded monsters. But it is also an example of beautiful storytelling, with instances of hope, love and the possibility of redemption. As a text, it presents wonderful opportunities to open up interesting discussions on faith, the nature of religion and humanity, as well as what intrinsic value we place on those 'other' than us. Are we as a society, selfish and insular, or altruistic and compassionate? Powerful and beguiling.
Alicia Papp, Library Officer, Mary MacKillop College, SA

This astonishing, original and beautifully crafted novel begins with an impossible scenario in Chapter one, The Fading God, 1890: ‘Even two centuries later, the ugly torment of the crew’s deaths haunted him’. After starting from the premise that this may be a romantic Celtic tale, as evidenced by title, author’s name, and cover illustration, we are now not sure if this is Sci-Fi, Gothic horror, Religious mysticism, or something else. As we move further in, we realise that the title is absolutely apt.

In Chapter two, we are transported to a Dickensian style tale, set in Dublin, The American Chap, 1890, so maybe it is historical fiction? Very quickly, the genre becomes irrelevant. We are drawn in by character, intricate yet delicately interwoven plotlines, and extraordinary settings; whether the interiors of Theatre, boarding house or Stately manor, or the exteriors of snow covered countryside, dirty city streets, the elaborate grounds of Fargeal Manor.

This is a book that I would not normally pick up. I tend to favour authors I know, or have recommended to me. I tend to prefer to read a book in one or two sittings, to gulp it, to enjoy the whole sweep at once. However, this novel has a haunting quality which drew me in, over several weeks as it turned out. It is so elaborate, so detailed, that I was not able to read it in bed, nor in long sittings. I needed to go away, for fear of being drawn too far in. I had nightmares after my first ‘reading in bed’ session. I read much of it with an underlying sense of fear that it would become too horrible, that the power of the writing would resonate too strongly with my mind. Maybe that says something about me.

I do recommend the novel, for those who read for more than action. The psychology of many of the characters is dark, the motivations often cruel, and the actions barbarous and selfish. Yet the one single pure character, Tina, ‘this vivacious girl’ and her beloved, Joe, ‘her slouching alley cat of a chap’ keep the light of goodness burning. I have read the bulk of this book during the coldest month I can remember, and the coldness of the setting has seemed apt.
For use in the classroom: this could suit individual study, or extension, for some YA readers. It could be paired with a Dickens novel, particularly for considering how young protagonists are constructed and contextualised. I am not sure that it could be used for general study.
Helen Wilde, SA

The theatre district of late nineteenth century Dublin is the fascinating setting for this fantasy, steeped in the history of the these times. Several young people are introduced early: Tina, the theatre seamstress is loved by Joe, a street worker living with the appalling Mickey, and a down at heel magician, lately travelled from America to work at the theatre, Harry, become endeared to the readers. We see their poverty, the demeaning circumstances of their lives, their hand to mouth existence, being exploited by those around them, all a neat contrast for what is to come. Through these impoverished streets hunts a team of men from another sphere, Immortals, on the prowl for something to tempt their ailing friend, a morsel which will revive him. The hints about this reinvigoration will make the readers’ spine tingle as all sorts of possibilities are hinted at. The paths of these two groups inevitably intersect, and a carriage whisks the dying Joe away, Tina kidnapped as well but with Harry finds a way to join them.

The description of the nineteenth century theatre scene in Dublin is mesmerising as is the description of the poverty in the back streets, along with the gangs, violence and crime. I really enjoyed the first part of the book set in Dublin, but found the section set in an icebound world more difficult to get my teeth into. But I kept going, wanting to follow and know the fates of our protagonists. The Immortals have taken their prey back to the castle to keep the angel alive, so the story becomes one of cat and mouse as the trio will do what they can to survive. The Immortals are an odd bunch, having been in the castle for over two hundred years and as the story proceeds, the reader will have all sorts of questions in their mind about just who they are. They bizarrely need new people to entertain them and the reader knows that those chosen for whatever reason to be the entertainers may also have a short life. But Harry, the American magician steals away in the coach as well and is outside the thrall of the Immortals, bent on rescuing his new friends and appalled at what the Immortals are doing to the captive angel. The main characters I found most endearing, and their back stories hinted at in the first part, are gradually revealed as their survival becomes uppermost in the tale.
For fantasy lovers this is a treat, engaging characters, a slice of strongly described reality in a finely tuned historical context then a different world where angels are a reality.
Fran Knight, retired teacher librarian

The story begins in Dublin, the theatre district, tenements, docks and back alleys of the 1890’s. Tina, a seamstress, Joe who loves her and a young Harry Houdini are taken by the mysterious Vincent and Cornelius to a country estate to perform in a private concert. However there is a more sinister reason for luring them to the Estate, they are to provide the nourishment for the entity that lives there, a strange creature that feeds on the spectacle and emotions of the performance. In return the “Angel” gives immortality to Vincent, Cornelius and those living on the Estate. The fate of the entertainers is less appealing.
With unique characters and story line this intriguing story is a combination of gothic, historical, fantasy, science fiction and horror, a compelling novel that I would recommend to senior students who like gothic fiction.
Jan O’Sullivan, Library Technician, Yarra Hills Secondary College, VIC