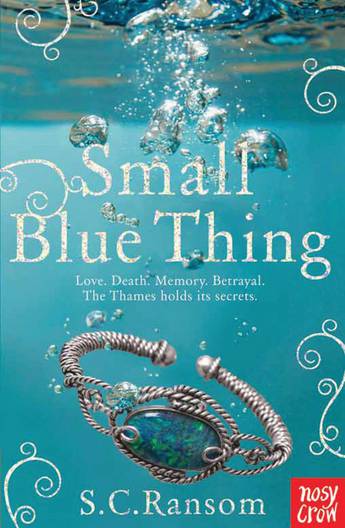 Love. Death. Memory. Betrayal. The river has its secrets. But one mysterious bracelet will unlock it all and lead Alex down a path that will lead her to fall in love and risk everything.

Celebrating the end of exams with best friend Grace, 17 year-old Alex rescues a swan caught on a wire in the Thames mud and finds an extraordinary bracelet. Through its disturbing and compelling powers, she finds Callum, a soul locked in a half-life of sadness and mystery following a terrible accident, and his persuasive and sinister sister, Catherine. As Alex and Callum grow closer despite the enormous obstacles to their love, the dangers mount until they must risk everything.
More books by this author More books in this series

Sue Ransom is a senior headhunter, but on the way to work and in the evenings she's a writer: she wrote Small Blue Thing, her debut novel, as a birthday present for her daughter, and she composed it mostly on her BlackBerry. Serendipity led her to Nosy Crow and now she's busy thinking up her next project. She lives with her husband and two teenage children in Surrey.

Small Blue Thing is a fantasy romance which was sweet enough to keep me interested as my nose was planted between its covers, but the characters and premise were not gripping enough to leave me aching for its sequel. The story revolves around two teenage girls – Alex and her best friend, Grace – a mysterious blue amulet and Callum and Catherine, the personalities they conjure using the amulet. Strong themes of trust, friendship, memories and love are explored in this story which make it worthwhile and exciting reading. Alex is new to high school love and exploring her feelings, she is unsure about how to deal with the conflicting emotions and the different positions Catherine and Callum present her with and her friendship is tested with Grace as she navigates herself through her difficulties.

S C Ransom’s strength is in the way she presents the high school relationships and Alex’s family. The conversations of the teenagers come alive realistically, and Grace and Alex’s relationship, and Alex’s relationship with her brother Josh and her parents are believable and sympathetic. She draws a picture of high school life that I’m sure many teenagers – girls in particular – would be drawn into and want to read more about. However, I was not so bound by the fantasy parts of her tale – by the romance between Alex and Callum which at times rang too sweet and soppy in comparison to the rest of the story – and the discussion of the frightening memory stealing attributes of the amulet which did not feel quite as true and believable given the tone of the story.

The book would be a good discussion point in the classroom about the themes of love, friendship and betrayal, and also the importance memory plays in our lives. Would we want to keep bad memories, even if they haunted us – are they just as important to us as good memories, and how do they shape who we are?
Rebecca Fung, NSW

When attempting to rescue a swan Alex discovers a mysterious bracelet in the murky waters of the river Thames. Whilst wearing the bracelet, Alex, sees a beautiful boy, Callum, whom she instantly falls in love with. To her great joy that feeling is reciprocated. There is only one small problem! Callum is a dirge, a ghost, who is caught in a ‘half-life’ of misery and sadness. Alex is determined to find a way the two can be together forever but when Callum's sister appears she must decide who she trusts and whether her future happiness lies with Callum.

Small Blue Thing is unusual in its genre as no vampires, werewolves or fallen angels appear on any of its pages. Instead the reader is introduced to the world of the dirges (ghosts) which is perfectly realised. The combination of a fascinating mystery, a romantic thread, great characters and a unique storyline will appeal to paranormal romance lovers. But they should be warned that the cliffhanger of an ending will leave them gasping for the next instalment of Alex and Callum’s story.
Pia Butcher, Knox Library, Victoria