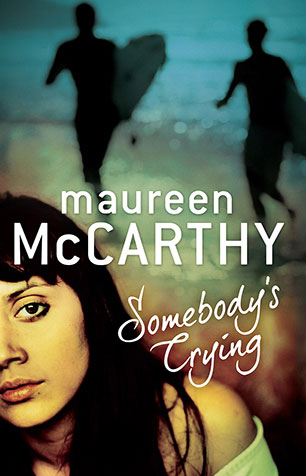 A murder in a country town is the backdrop for the story of three young people, Alice, Tom and Jonty, who are bound together because Alice's mother was murdered and Jonty is the suspect. This is a compulsive read from master storyteller Maureen McCarthy.

When Alice looks up and sees Tom staring at her, everything closes down around them and becomes very still. No one is breathing. No one else is in the room. Tom feels as if he can see right into the soul of Alice Wishart. It lies open before him, like a wide, long pane of glittering glass. So delicate and beautiful and . ready to break.

Three years have passed since the murder of Alice's mother, but still the killer is unknown. Alice, her cousin Jonty and his friend Tom are drawn together by the mystery, but what is each of them hiding? Will their secrets bind them tighter or tear everything apart?

Maureen McCarthy's intensely real characters will draw you deep into a world of suspicion, betrayal, desire and redemption.

A compulsive reading experience from the bestselling author of Rose by any other name.
More books by this author

Maureen McCarthy is the ninth of ten children and grew up on a farm near Yea in Victoria. After working for a while as an art teacher, Maureen became a full-time writer. Her novels have been shortlisted for numerous awards and include the In Between series, which was adapted from scripts Maureen co-wrote with Shane Brennan for SBS TV; Ganglands; Cross My Heart; Chain of Hearts; Flash Jack; and When You Wake and Find Me Gone. Her Bestselling and much-loved book Queen Kat, Carmel and St Jude get a life was made into a highly successful four-part mini-series for ABC TV. Her most recent novel, and the first to be published by Allen and Unwin, is Rose by Any other name. Maureen has three sons and lives in Melbourne.