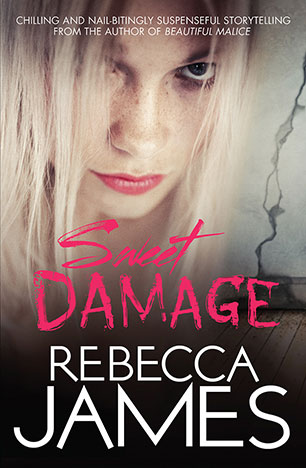 Chilling and nail-bitingly suspenseful storytelling from the author of Beautiful Malice.

'I still dream about Anna London's house. In my dreams it's as if the house itself has sinister intentions. But in real life it wasn't the house that was responsible for what happened. It was the people who did the damage .'

When Tim Ellison finds a cheap room to rent in the perfect location in Sydney it looks like a huge stroke of luck. In fact the room comes with a condition, and the owner of the house, the mysterious Anna London, is unfriendly and withdrawn. When strange and terrifying things start happening in the house at night, Tim wonders if taking the room was a mistake. But then his feelings for Anna start to change, and when her past comes back with a vengeance, Tim is caught right in the middle of it.

A thrilling, rollercoaster of a story - read it with the lights on!

Rebecca James was born in Sydney in 1970. She spent her early twenties working as a waitress, her late twenties teaching English in Indonesia and Japan, and most of her thirties having babies and working as a kitchen designer. Her first novel, Beautiful Malice, was an international publishing sensation, selling in 52 countries. This was followed by Sweet Damage in 2013 and Cooper Bartholomew is Dead in 2014. Rebecca lives in Canberra with her partner and their four sons.

This is a gripping read by publishing sensation Rebecca James. It is her second book and will obviously create as much interest as her first novel, Beautiful Malice. Once you start reading this book it is impossible to put down such is the pace of it and the suspense that James so cleverly creates. We hear two voices in the book, Tim Ellison a young man finding his way in the world and dealing with lost love. He works in his father’s café and he loves to surf in Sydney’s beautiful beaches. The second voice, introduced in the third person, is that of Anna London, a damaged rich girl who needs a housemate to share her beautiful mansion in an elite Sydney suburb. Her parents both died in a tragic car accident and save for her two lawyer friends, brother and sister, Marcus and Fiona, she is truly alone in the world. Tim becomes her housemate and immediately realises that the agoraphobic Anna has troubles beyond his experience. The amazing old house full of antiques and vast rooms has stories of its own and reveals itself in a terrifying way at night. The reader is kept constantly on edge as Tim tries to get to the bottom of why the house appears haunted and why Anna is so deeply troubled. Tim’s ex-girlfriend, demanding and egocentric Lilly, takes another key role in this story as she forces her way back into his life by moving into the house and further complicating the story. Eventually it is Tim’s kindness and gentle heart that allows Anna to heal and the mysteries in the house are revealed for what they really are.
The story moves along briskly with intrigue on each page as the reader questions the sanity of the characters and the validity of what they are experiencing. There is a lot to like about Tim and Anna and it is this that helps the reader to empathise with them and read on thus ensuring that both will be alright in the end.

There are many themes in this book such as jealousy, revenge and the impact of grief, which makes it a very worthy book to study with students. I would like to include it in a literature circle collection for capable readers who enjoy the psychological thriller genre. Sweet Damage has very much the look and feel of James’s previous novel Beautiful Malice even down to the relationship between the two female protagonists. It is a winning formula that will be sure to attract continued interest in this author.
Sharon Marchingo, Crusoe 7-10 Secondary College

Have you ever read a book in bed, afraid to let stop because you couldn’t, absolutely couldn’t, not know what happened next?  That was my experience with Sweet Damage and the experience was glorious. Fortunately, Sweet Damage is a fairly easy read so I ripped through it in a night.  It has all the great tropes of a modern ghost story.  A sweet but rather spooky (and very attractive) female with a mysterious past and a protagonist who’s lovely but sometimes you just want to kick and say “Why would you do that, are you insane?”  And of course a large house, holding a secret.

Rebecca James holds the story together well and it’s a real pageturner.  I alternately felt for Anna and Tim, and loved to hate Lilla, Tim’s ex.  I did feel that Lilla could sometimes become a bit of a caricature of herself, and this could be a bit of a weakness in the characterisation whereas Tim and Anna were much more believably drawn and you really got into their heads. While the book starts with Anna announcing she has agoraphobia, this is not really an exploration of this condition and anyone looking for a serious, sensitive or in-depth discussion of agoraphobia and its manifestation will be disappointed.  Agoraphobia is simply used as a tool to explain Anna’s behaviour to begin with, but from there the story is really about her haunted past, the relationships between the characters, especially Anna and Tim, and the spooky happenings in the house.  It’s a good story from there, so long as you don’t go in with false expectations.

I was thoroughly engrossed, chilled, and I expect others will be as well.  I would recommend it for mid-to-older teenagers, as well as any adults.
I think this book would be great to discuss in the classroom as a model for classic horror techniques – what makes people scared in a story, what were the traits in the characters that exist in other common horror stories eg Lilla’s malice, Anna’s haunted past, Tim’s naivety.  Did the reader’s expect certain plot twists and how did the author manage to keep up the suspense?
The book also introduces the theme of the disparity between Lilla and Anna and their upbringing and pasts, and how it affects them.  What did people end up thinking about Anna and Lilla – were they thoroughly products of their past and of fortune?  Lilla is clearly the antagonist, but did you end up feeling for her as she points out Anna’s more fortunate circumstances of birth?  How much do you think people can blame their past on how they behave and the person they become?
Rebecca Fung

Aimed at the older adolescent market this is an interesting look at a number of current social issues. Tim Ellison is a twenty something that is having trouble deciding what to do with his life, (does this sound familiar to those of you with children the same age?). He is living with his ex-girlfriend and her boyfriend, cooking at this dad’s restaurant, surfing and enjoying life. The ex finally tells him he needs to find somewhere else to live and he snags accommodation in a large mansion within walking distance of work. The ‘landlady’ is a girl of the same age who has issues- the low rent is reliant on Tim helping out. Anna is acrophobic- the result of a tumultuous couple of years. The novel traces there developing relationship and Anna’s journey from complete despair to being able to face the world.  Amidst the complexity of this relationship is the troubling relationship with the ex-girlfriend who doesn’t seem able to completely let go of Tim. Her issues stem from a childhood without a father and a mother who is accepting of the poverty she lives in. This has an impact not only with her relationship with her boyfriend but with others in life.  There are a few instances where I did pause to wonder if I needed to put a restricted reading in the school. I would definitely put in my library because it covers so many social issues that are currently prevalent without being sensationalist also being a great read.
Peta H