The Ocean of the Dead: Ship Kings 4 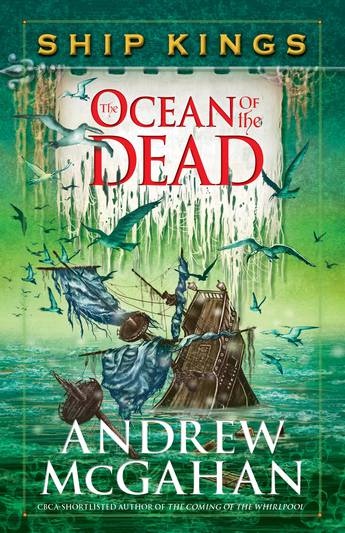 New in paperback.
The cataclysmic final book in the award-winning Ship Kings series. In search of a new world, Dow and Nell must face the final frontier - the treacherous Doldrums. Their journey will be filled with wonders; the rewards could be great - but the cost might be everything, for there are good reasons why none who have sailed the Ocean of the Dead have returned to tell the tale.

It is no easy thing, to take leave of the world.

At very long last a captain of his own ship, Dow Amber is determined to venture beyond the final frontier - the still, stagnant waters of the Doldrums - in search of a New World. With Nell finally by his side, he is hopeful that they can start again, far from politics, betrayal and war.

But none who have sailed the Ocean of the Dead have returned to tell the tale. Before long, an old enemy appears. And with the enemy new dangers. Does the fleet sail to certain death, or to glorious new life beyond the treacherous Doldrums?

The Ocean of the Dead is the cataclysmic conclusion to Andrew McGahan's stunning Ship Kings series.
More books by this author More books in this series

Andrew McGahan was one of Australia's finest fiction writers. His first novel, Praise, won the 1992 Australian/Vogel Literary Award. The White Earth won the 2004 Miles Franklin Literary Award, the Commonwealth Writers' Prize, The Age Book of the Year and The Courier Mail Book of the Year Award. In 2009 Andrew was shortlisted for the Manning Clark House National Cultural Awards for his contribution to Australian Literature.

The Coming of the Whirlpool, book one in the Ship Kings series, was shortlisted for an Indie Award, an ABIA, an Aurealis Award, a Golden Inky and a 2012 CBC award. Book two, The Voyage of the Unquiet Ice was Highly Commended in the 2012 Fellowship of Australian Writers National Literary Awards -- Christina Stead Award, a 2013 CBC Notable Book and shortlisted for the Queensland Literary Awards. Andrew died in 2019.