The One and Only Jack Chant 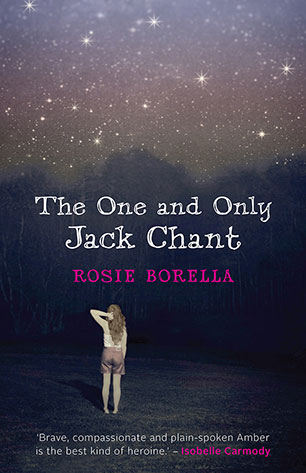 Who is Jack Chant? And why is he hanging around her nursing home? That's the question sixteen-year-old Amber must ask herself as she's swept out of her routine job and taken on a poignant journey of mystery, romance and self-discovery.

Sixteen-year-old Amber never expected to find romance while working in an old people's home . but then Jack Chant is not what she expected either. He's young, exciting and enigmatic - and deeply troubled by something that happened in his past, something he can't quite remember. Gradually Amber suspects that Jack's past might be a whole lot further back in time than he realises. Is he solid flesh and blood, or just some kind of dreamy fantasy?

A sweetly romantic coming-of-age story in which Amber learns more than most teens about getting old, falling in love and letting go.

Rosie Borella has been crazy about two things ever since she can remember - riding horses and writing. A few years ago, she left behind a working life that had always involved writing - as a journalist, sub-editor and editor, and in public relations, science writing and marketing. She went back to nursing part time, so she could spend her free time writing what she really wanted - fiction. Her story 'Eternity' in the Tales from the Tower collection has garnered rave reviews. The One and Only Jack Chant is her first novel.

Rosie lives on a farmlet on the Bellarine Peninsula in Victoria. She writes from a room at the back of the house that looks into an overgrown garden. Being inside her writing room feels like being inside the Tardis. An escape hatch would make it just perfect.

This Australian novel is set in country New South Wales, where sixteen year old Amber is living and working despite the fact all her friends have moved on to University in the city. Training and then working as a carer for the elderly, she comes to feel responsibility for her patients’ overall wellbeing as well as for their daily care. At the same time, she becomes aware that the nursing home has some serious problems. When her neighbour is brought in for care after an accident, she is forced to make some tough decisions. Complicating things is the mysterious Jack who appears from time to time in the nursing home, and who also tries to make life easier for the residents. However, only Amber seems to see him, and he can’t quite recall all the details of his life and what he is doing there. He is tied to one of the residents somehow, but he cannot remember how. Amber cannot even be fully sure that he is real.

This text explores the themes of responsibility and growing up, as Amber negotiates the different expectations on her at home and at her job. She is a keen observer of her patients and the running of the nursing home, and comes to recognise the rights of the elderly and their vulnerability to exploitation. There is romance with Jack, and all the threads of the story are affected by the supernatural mystery of his presence and the fact that he seems somehow displaced in time. The details of the home and the care of the residents, as well as the life of a carer for the aged, are confronting and vividly described. The novel explores country Australia, establishing the sense of community, the problems of a lack of work and infrastructure, and the desire of young people to go the city for university. All of these elements are worthy of discussion in a classroom.

I would recommend this text to teenagers, particularly girls of around the same age as the protagonist Amber. There is a lot in the novel for girls moving into the wider world and beginning to question their place in it. The text also is made up of elements of a range of genres including romance and the supernatural, which widens its appeal.
Anne Sim, Dromana College, VIC

Rosie Borella’s novel tells the story of Amber, a sixteen-year-old girl, who, undecided about her future, secures a position as a Carer working in a nursing home. Initially, I was somewhat sceptical about the appeal of a book that chooses to stray so far from the subject matter found in many Young Adult books today; and yet it is this perspective which provides a fresh uniqueness to what is otherwise a classic ‘coming of age’ story.

Amber has a fractured relationship with her parents. She is too young to be respected as the adult she is evolving into, yet old enough to shoulder the responsibilities of babysitting and child care. Her lack of self-belief, coupled with an uncertainty about her future give her character broad appeal with a teenage audience. When she meets Jack Chant, a mysterious young man with an almost Edward Cullen-like appeal; I couldn’t help but be drawn into Borella’s web. Perfect for each other, I needed them to end up together.

The One and Only Jack Chant, deals with a range of themes including the joys and sorrows of growing older, reconciling with ones’ past, the tragedy of loss, and the sweetness of first love. This text would be most appropriate for students in the latter years of high school and should work quite well as a shared text (years 10-12), although it would be well suited for independent study. It would pair harmoniously with other Australian rural coming of age stories; specifically Steven Herrick’s Black Painted Fingernails or Margaret Wild’s The Vanishing Moment (refer to earlier reviews). As a whole, Borella’s narrative is beautiful in its pristine simplicity. Occasionally, particularly during the long dream-type sequences, I found myself a little distracted, yearning to go back to the ‘real world’ of the nursing home where Borella’s subtle humour shines through at its brightest.

Borella’s story, while starting out as a Contemporary Romance, reaches into the realm of Mystery and the Paranormal. Is Jack Chant real flesh and blood, is he a convincing spectre or is he simply the product of Amber’s active imagination? The One and Only Jack Chant is an achingly beautiful romance that will have you guessing until its dramatic conclusion.
Tanya Grech Welden, Secondary English Teacher, Gleeson College, SA

Borella gives the reader a preview of the underlying thesis of this teen romance/ghost story/social issues based novel with a Prologue in which Jack Chant is shown as a circus performer estranged from his family, and which ends with a shocking accusation by his father. There is something strange about this picture though: we are not sure if it is dream or reality. The location is undefined as to place or time.

Once the novel moves into chapter one, we are in a totally different world. We are definitely in the present time. After finishing High School, sixteen year old Amber's world has become a very stark reality of old age, infirmity, and the carers who manage the daily grind of working in a Nursing Home. We know this is Australia now, from the language used, from descriptions of locations, from words such as pushbike, chook, toastie. To find the links between the two worlds, the reader needs to be alert. Jack Chant is introduced into Amber's reality in Chapter one, as the boy who 'was lounging there in the corner near the window. Tall. Dark, curly hair. Lively eyes. Smiling.' Confusion is also introduced in this first chapter, as simultaneously Amber is also meeting Jack Hatchett, a demented old man who also happens to be her former teacher. The confusion of the first names, Jack and Jack, serves as a device to keep both Amber and the reader confused as to the boy's true identity.

Borella's technique of using the omniscient author’s voice allows us to accept events as they unfold. The author creates vivid pictures of both worlds, that of Jack Chant, circus performer, and also that of young Amber, the carer who somehow ends up mostly on night shift at the inefficiently run 'Tranquil Banks' Nursing Home. At times the link is somewhat strained, and the reader must 'suspend disbelief' to accept that Jack Chant could physically manifest in order to put right a wrong from his past.

Borella provides a thought provoking perspective on the realities of the infirmities of old age & the somewhat flawed system which cares for them, and of the dilemma of what is almost assisted suicide- where does autonomy, dignity & the right to choose end? She also provides a spooky tale which could well appeal to readers, as well as an innocent love story. It's probably best suited to about middle High School students, and possibly of more appeal to girls. For classroom use, extracts from this text could well be useful in Australian Studies, Religious Studies, and in Philosophy. It would lend itself well to a discussion of the rights of the old & the responsibilities of those caring for the elderly; of a range of issues relating to old age. The moral dilemma faced by Amber could provoke strong discussion on right and wrong action. The writing is strong, and the worlds of both the Nursing Home and the rural life of an Australian teenage girl keenly observed and realised. For work in English classes, the technique of 'switching' between worlds could be of interest. There is also scope for a unit on ghost stories, as this part of the story could almost be studied separately from some of the other issues.
Helen Wilde, SA