The Taste of Lightning 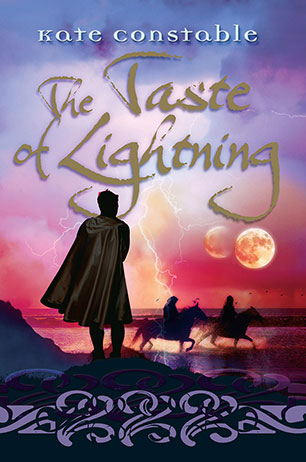 High adventure, romance, worldly ambition and magical power all come into play when three extraordinary young people escape from the Palace of Arvestel and flee on horseback, pursued by the army - and by sinister magic.

A thrilling adventure set within a storm of secrecy.

Tansy, Perrin, and Skir could hardly be more different - a laundry-maid, a swordsman and a young Priest-King whose countries are at war. But their frantic escape from Arvestel thrusts them together. Pursued by soldiers, haunted by the Witch-Woman's sinister magic, they ride for their lives through hostile lands.

To survive they must learn to trust each other, strip away the layers of deception that surround Skir, and challenge the tyranny of the Witch-Woman. But what will happen if all truths are revealed? And will the power of the Priest-King be enough to bring peace to the Threelands?

'Constable's flavour of fantasy is fresh and full of heart. Politics, romance, magic - what more could you ask for? A beautiful and complex book.'

Kate Constable was born in Victoria but spent much of her childhood in Papua New Guinea, without television but within reach of a library where she 'inhaled' stories. She studied Arts/Law at Melbourne University before working part-time for a record company while she began her life as a writer. She has had stories published in Meanjin, Island and other literary magazines. The Singer of All Songs, The Waterless Sea and The Tenth Power form the Chanters of Tremaris series and were her first books, published by Allen + Unwin with very successful overseas sales. Kate lives in West Preston, Victoria, with her husband and two daughters.