Book 3 of the Chanters of Tremaris 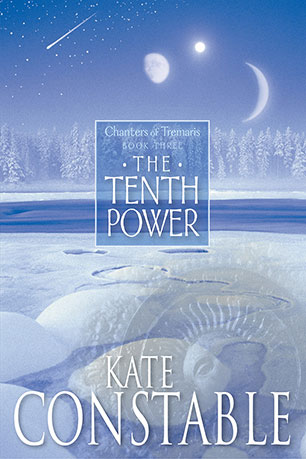 This is the third and final book of the Chanters of Tremaris series, a dramatic fantasy saga of adventure and magic, for readers 12+.

A dark secret is tearing Tremaris apart. From the frozen Bay of Sardi to the endless winter of Antaris, sickness is spreading and even the seasons are slipping into chaos.

Calwyn has lost her powers of chantment and flees back to Antaris. But instead of sanctuary she finds the community ravaged by a mysterious snow-sickness and torn apart by tyranny. When she learns that Darrow, too, has been infected, Calwyn begins a desperate race through the frozen forests. But will she find the answers in time to heal him? And will she have the courage to embrace the dark magic and save Tremaris?

The Tenth Power brings the Chanters of Tremaris series to an enthralling conclusion.

I'm such a huge gigantic big fan of the Tremaris series. I read The Singer of All Songs and The Waterless Sea about 10 times each.!' Jinny
More books by this author More books in this series

Kate Constable was born in Victoria but spent much of her childhood in Papua New Guinea, without television but within reach of a library where she 'inhaled' stories. She studied Arts/Law at Melbourne University before working part-time for a record company while she began her life as a writer. She has had stories published in Meanjin, Island and other literary magazines. The Singer of All Songs and The Waterless Sea are the first two books in the Chanters of Tremaris series. Kate lives in West Preston, Victoria, with her husband and two daughters.