What the Woods Keep 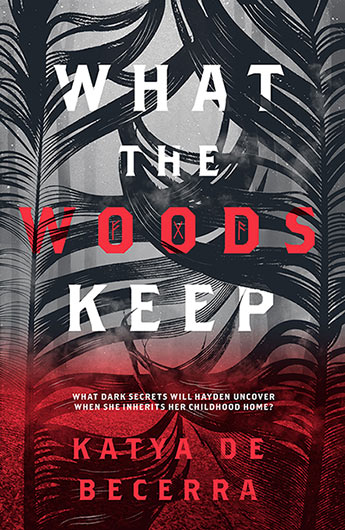 Katya de Becerra's stunning debut combines mystery, science fiction, and dark fantasy in a twisty story that will keep you mesmerized right up to the final page.

On her eighteenth birthday, Hayden inherits her childhood home - on the condition that she uncover its dark secrets.

Hayden has tried to put the past behind her, and so far it's worked. She's getting ready for college, living in a Brooklyn apartment, and hanging out with her best friend and flatmate, Del. But now it's all catching up with her: her mother's mysterious disappearance a decade ago, her father's outlandish theories about a lost supernatural race, and Hayden's own dark dreams of strange symbols and rituals in the Colorado woods where she grew up.

As soon as Hayden arrives at her hometown, Del in tow, it begins: neighbours whisper secrets about Hayden's mother; the boy next door is now all grown-up in a very distracting way; and Hayden feels the trees calling to her. And among them, deep in the woods, Hayden will discover something incredible - something that threatens reality itself.
More books by this author

Katya de Becerra wanted to be an Egyptologist when she grew up. Instead, she became a cultural anthropologist - not the type who goes away to faraway locales but the one who sticks to the urban and the familiar and attempts to view it through a stranger's lens. She immigrated to Australia in 2006, after having lived in Russia, USA and Peru, and now writes young adult fiction set in some peculiar place with a mercurial atmosphere where strange things go bump in the night.