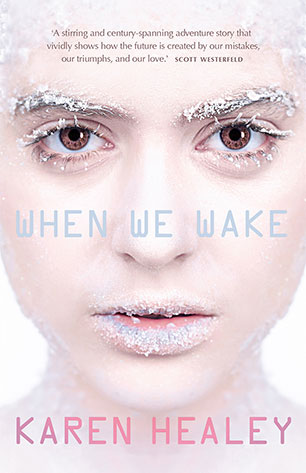 The last thing Tegan remembers is the crack as the gun went off, intense pain, and everything fading to black. One hundred years later, she wakes up. A fast-paced near-future romance. 'A stirring and century-spanning adventure story that vividly shows how the future is created by our mistakes, our triumphs, and our love.' - Scott Westerfeld

'A gripping, human story set against the backdrop of a chillingly plausible future here.' - Sean Williams

'A stirring and century-spanning adventure story that vividly shows how the future is created by our mistakes, our triumphs, and our love.' - Scott Westerfeld

Sixteen-year-old Tegan is just like every other girl living in 2027 - she's happiest when playing the guitar, she's falling in love for the first time, and she's joining her friends to protest the wrongs of the world: environmental collapse, social discrimination, and political injustice. But on what should have been the best day of Tegan's life, she dies - and wakes up a hundred years in the future, locked in a government facility with no idea what happened.

Tegan is the first person to be cryonically frozen and successfully revived, which makes her an instant celebrity - though all she wants is to rebuild some semblance of a normal life . including spending as much time as possible with musically gifted Abdi, even if he does seem to hate the sight of her. But the future isn't all she hoped it would be, and when appalling secrets come to light, Tegan must make a choice: Does she keep her head down and survive, or fight for a better future?

Award-winning author Karen Healey has created a gripping tale of an inspiring heroine living in a not-so-distant future that could easily be our own.
More books by this author

Karen Healey is the author of the critically acclaimed Guardian of the Dead and The Shattering. She likes sundresses, researching world-ending apocalyptic scenarios, and books about lady spies. She doesn't like library fines.