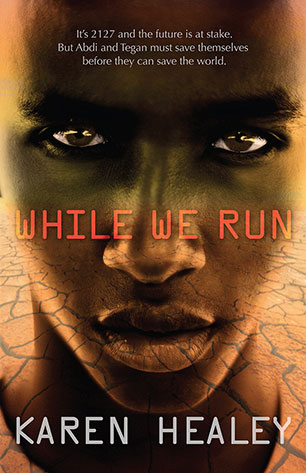 It's 2127, and the future is at stake. But Abdi and Tegan must save themselves before they can save the world.

Abdi Taalib thought he was moving to Australia for a music scholarship. But after meeting the beautiful and brazen Tegan Oglietti, his world was turned upside down. Tegan's no ordinary girl - she died in 2027, only to be frozen and brought back to life in Abdi's time, 100 years later.

Now, all they want is for things to return to normal (or as normal as they can be), but the government has other ideas. Especially since the two just spilled the secrets behind Australia's cryonics project to the world. On the run, Abdi and Tegan have no idea who they can trust, and when they uncover startling new details about Project Ark, they realise thousands of lives may be in their hands.

A suspenseful, page-turning sequel to When We Wake that will keep readers on the edge of their seats and make them call into question their own ideas about morality - and mortality, too.

Karen Healey is the author of the critically acclaimed Guardian of the Dead, The Shattering, and the first book in this series, When We Wake. She is also a secondary school teacher. She has heard tell of magical things called weekends.