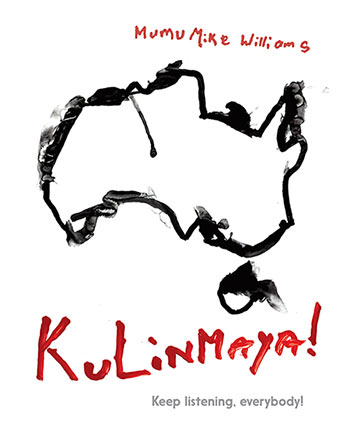 A magnificent celebration of Kunmanara Williams' life and art and the land rights movement in the Anangu Pitjantjatjara Yankunytjatjara (APY) lands of Central Australia. Told in Pitjantjatjara and English.

'I want my book to be in schools and read by politicians and young people everywhere, so that they can learn about Tjukurpa Law, and realise how crucially important Tjukurpa is to Anangu Aboriginal people. Our Tjukurpa Law is all-encompassing. It was always intended to be eternal, but we know it is at risk. This is why I am documenting it now. I want to raise people's consciousness. I want us to be acknowledged by the wider society and the government. I am hoping to start a movement of new awareness.'

Mr Williams was born in 1952 in Inturtjanu on the Anangu Pitjantjatjara Yankunytjatjara Lands (APY Lands) of South Australia, and became one of the most renowned political artists in the country. He learnt to read and write in Pitjantjatjara and English at the Ernabella Mission School, before working as a stockman, carpenter and pastor. As a young man, he was active in the APY land rights movement that led to the signing of the Pitjantjatjara Land Rights Act in 1981 and the return of land to Anangu. He remained politically active, advocating for his country and his people through his art and stories. Williams travelled the world for work, but always returned to his obligations as a senior man and traditional custodian. As a renowned ngangkari (traditional healer), pastor of the Mimili Community church and political activist, he proudly shared and protected the knowledge and duties given to him through his culture. In his art practice, he addressed issues including governance, sustainable land management, the protection of sacred heritage sites, and the rights of traditional owners. Creating Kulinmaya! Keep Listening, Everybody! was Mr Williams' long-held dream as it would be a vessel to disseminate his message far and wide. The book and the artworks stand as his epic legacy, keeping his voice and ambitions alive beyond his passing in March 2019.